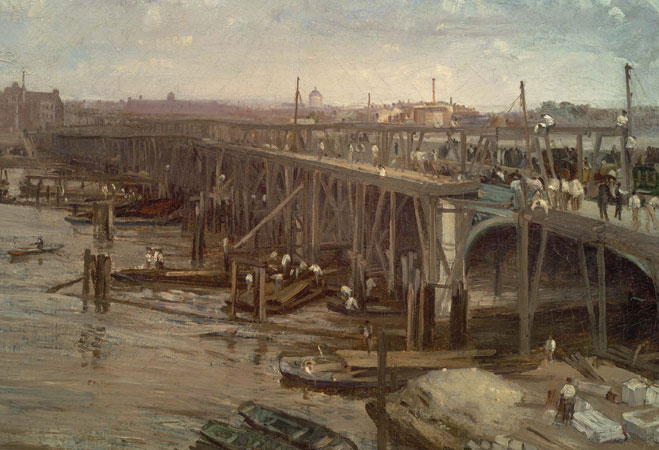 The Gallery’s 2013 autumn show ‘An American in London: Whistler and the Thames’ led co-curator of the show, Margaret F. MacDonald, to make an exciting revelation. Intrigued by notes contained in the condition report for Whistler’s The Last of Old Westminster, Exhibitions Officer Nadine Loach requested a copy of an existing x-ray, from The Museum of Fine Arts, Boston - the Gallery that owns the painting, eager to learn more. This x-ray had previously revealed an unknown portrait by Whistler hidden beneath the painting but it was not known who it was. However, upon sharing the image with MacDonald,  her familiarity with Whistler’s works allowed her to immediately identify the subject of the portrait as Whistler’s young mistress and model Joanna Hiffernan who lived with the artist in London for five years.

Experts had believed Whistler created only around six portraits of Hiffernan including the well-known Symphony in White, No. 2: The Little White Girl, 1862 but on viewing the X-ray of The Last of Old Westminster, MacDonald was certain that the faint figure of a woman reading was indeed her. Only trace colour analysis will offer irrefutable proof, but the date and composition was enough to convince MacDonald!

“It was exciting to find that the hidden portrait was in fact of Joanna – Whistler’s model, muse and lover – particularly as she features in one of his most famous paintings Symphony in White, No. 2: The Little White Girl which was in the show. This kind of revelation is not something that happens for every exhibition! It is certainly a very special find and is sure to affect future research and exhibitions of Whistler’s work.”

Of course visitors to the show will be aware that this is not the first time Whistler made such a sacrifice. Another river scene painted in the same year, Brown and Silver: Old Battersea Bridge, 1862, has a self-portrait underneath, which was on display in the exhibition with an accompanying image of the x-ray.

Following its debut at Dulwich An American in London: Whistler and the Thames has received international acclaim on its tour to the Addison Gallery of American Art, Andover, Massachusetts (1 February – 13 April 2014) and its current showing at the Freer Gallery of Art and the Arthur M. Sackler Gallery, The Smithsonian’s Museums of Asian Art, Washington D.C. until 14 August 2014.