Balbina Pawlowska, Press Intern, blogs about her first glimpse of the frame for the magnificent Venus and Adonis, executed in Titian's studio, and now hanging in the Gallery after extensive restoration.

I was lost for words when I saw the newly restored frame for an early version of Venus and Adonis for the first time last week. Having seen pictures of the frame before restoration, it was in a state of complete disrepair and nothing quite prepares you for the impact of the transformation. As I watched the addition of the finishing touches the unique appeal of this distinctive frame became ever more apparent within the context of the Gallery walls.

Now, the frame is a beacon of 18th century craftsmanship, equally as beautiful as the artwork displayed within its four corners.

The early version of Venus and Adonis and its frame have been reunited after almost two years of painstaking restoration work. The hanging of both painting and frame marks the culmination of a conservation journey that began in 2009. Both were in desperate need of restoration, and after appearing in an exhibition titled “Desperately Seeking Conservation”, the restoration of this forgotten masterpiece was able to begin in 2012.

The frame has undergone extensive renovation, transforming from rundown to remarkable. When it was found, most of the gold leaf had flaked off, revealing broken gesso and cracked timber. 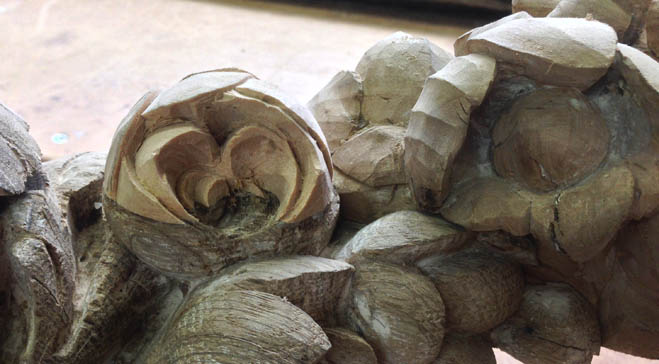 The unusual decision was made to strip the frame right down to the oak, due to the irreparable damage incurred as a result of the poor storage conditions. Cracks were filled in, parts of the frame were secured and broken detailings were meticulously re-carved in this ambitious two year project. The finished result is an extraordinary example of skill, both within the original craftsmanship and the frame’s extensive conservation.

Damage aside, the complexity of the frame’s design and its sheer proportions – it measures 8ft x 8ft – meant that this was a project only for the very determined and patient; the Gallery’s frame conserver, Tom Proctor.

I caught up with Tom during the very last stages of the project, as he prepared to return the frame to the Gallery walls.

What’s made this project so special?
Well, the frame itself. It’s size of the frame, the detailing. It was designed for the painting; you can see that in the kissing birds, the roses all over the frame symbolising love.

What was the most challenging part of the restoration?
The whole thing! The entire frame needed to be restored. I had to strip it right down to the timber. Preparing the frame for restoration took a long time, as I had to make sure I got into all crevices of the carvings to get rid of the all damaged layers.

What aspect did you find the most enjoyable?
Gilding. Getting the gold leaf onto the frame was fun, because it signified that this project was finally coming to an end. I felt like I was on the home stretch!

Do you think you’ll ever embark on anything as ambitious again?
I’d be very lucky to. It’s so rare to come across a frame of this size and style, and of this detail. And it was special to be able to restore the whole frame, as opposed to just parts of it; to be able to work on it from start to finish. I am hugely relieved, but also sad that it’s finished.

The Gallery would like to give thanks to Lesley and Dennis Robins for funding the frame, and for enabling its restoration.