Throughout 2016's run of "Making Discoveries" displays - exploring Dutch and Flemish artists in the Gallery's collection - our assistant curator, Helen Hillyard, will be writing a series of essays putting specific works in greater focus. This project is also being published with Smarthistory, a popular online learning resource for the History of Art.

The defeat of war by love

The goddess Venus is shown in her boudoir feeding her son Cupid, who clings to his mother’s arm while clutching at her drapery. The pair is watched by Venus’s lover, Cupid’s father, Mars (the god of War). His expression is one of tenderness as he is quite literally disarmed, he has removed his helmet and his shield lies abandoned on the floor. Cupid’s own bow and arrows also lie on the ground. The painting can be interpreted symbolically as the defeat of war by love, a reading that is further underlined by the presence of the ghostly putti who play beside Mars’s head. 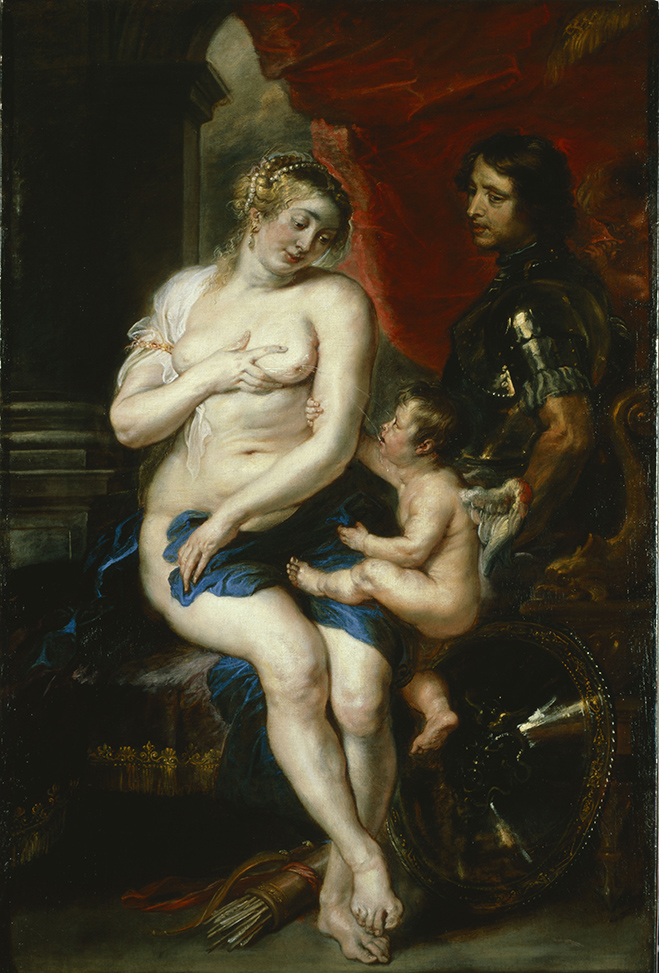 Venus, Mars and Cupidwas painted in the early 1630s and the composition is closely related to Rubens’ large-scale Peace and War (below). This is particularly evident in the figure of Peace who takes a similar pose and, like Venus, feeds milk to her child. The figures’ hair is also similarly dressed. Because of these broad similarities, it has been proposed that the histories of the two works might be interconnected.

Peace and War was executed in England in 1629-30, illustrating Rubens’s hopes for the peace he was trying to negotiate between England and Spain in his role as diplomatic envoy on behalf of Philip IV of Spain. Rubens eventually presented the finished work to Charles I of England as a gift.

Given these similarities as well as the theme of the subject matter—the triumph of love over war—it has been proposed that the Dulwich painting was likewise a diplomatic gift. In fact, a work fitting the description of the Dulwich painting is recorded in the inventory of Spanish nobleman Juan Gaspar de Cabrera, 10th Admiral of Castile; which might indicate the paintings were given to both England and Spain to commemorate the peace talks. 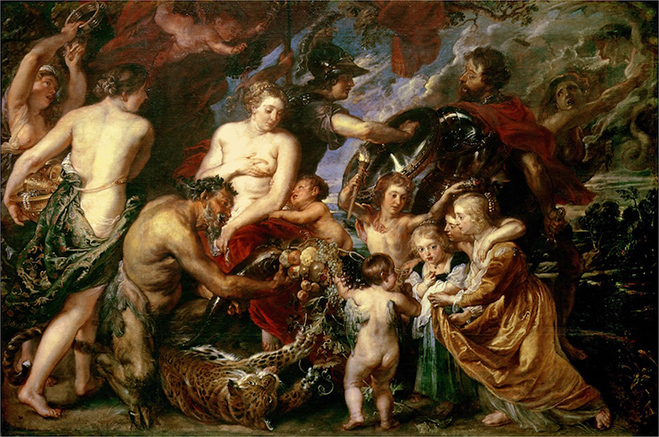 What a technical analysis and an X-ray reveals

Recent technical analysis has shown that the materials used by Rubens were commonly found in Antwerp, indicating that the Dulwich painting was likely made after Peace and War, once the artist had returned from England, before being sent onward to Spain. Rubens frequently revised his works during the course of painting, and these changes are revealed in an X-ray of the work. X-rays can pass through most solid objects but are obstructed by certain materials, including lead-based pigments. This means that changes made by Rubens using lead white paint are made visible, allowing us to trace the development of the painting, and gain an invaluable insight into his thought processes and working methods. In the X-ray we can see that the position of Venus’s head was changed and the red curtain made larger, so as to cover more of the sky. Cupid’s left leg was bent so that his foot rested behind Venus’s knee; his right leg has also been altered slightly and his head raised. Venus’s left leg originally stretched out from the knee towards the right of the picture.

The X-ray also reveals that the drapery was once more taut, an effect now disguised by the degraded condition of the blue pigment. This would have counteracted the impression that Cupid was falling backwards and he would instead appear to be pulling himself upward. 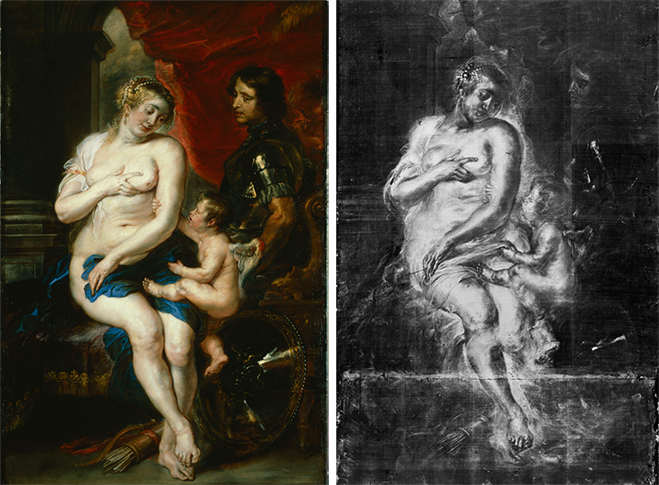 Rubens and his workshop

Although the painting is today attributed to Rubens, it is unclear to what extent his studio was involved in its production. Rubens managed a large workshop with many assistants, which enabled the artist to meet the immense demand for his work. It is often difficult to decipher where the studio’s involvement ends and where the work of the master begins. For instance, Rubens would frequently retouch and “finish” studio versions of a painting in order to ensure that they were of a sufficiently high standard and works would certainly not leave the workshop without his approval. Such works are regarded as being “by Rubens” even if not entirely by his own hand. In the case of Venus, Mars and Cupid, it is tempting to think that the assistants might have sketched in the majority of the painting with Rubens himself applying those crucial finishing touches.