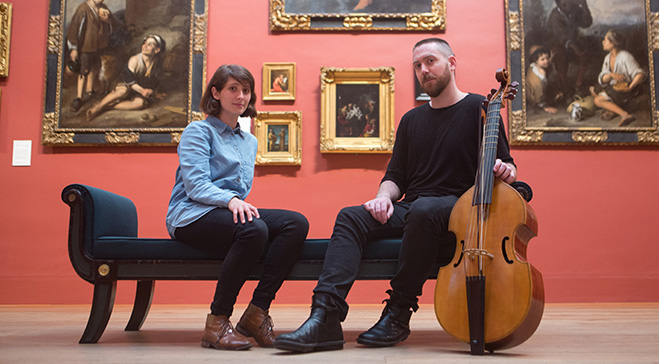 In Dou in Harmony, two of Gerrit Dou’s finest musical-themed paintings - Woman playing a Clavichord and A Young Lady Playing a Virginal - are now hanging together for the first time since their creation in 1665. Evoking the mood of Dou's works, the display is complimented by a contemporary sound installation by viola da gamba player Liam Byrne. This November, Byrne will mark this special reunion by presenting an evening of live music, transporting the listener into the private, sensual and physical world of the paintings.

Xavier Bray: With Making Discoveries, we are trying to bring different themes and ideas out of our pictures. We are borrowing this wonderful version by Dou A Young Lady Playing a Virginal from a private collection and reuniting it for the first time with Dulwich’s own, Woman playing a Clavichord. In these two pictures, there are these amazing musical instruments prominently depicted. We thought it would be a good idea to bring these Dou pictures to life through the sounds that they could “emit”, at least poetically.

Liam Byrne: For me, this concert is a particularly exciting opportunity. I get to respond to these paintings in the language of their time, in the sort of settings that Dou depicted. Also, commissioning a new work from Josephine for viola da gamba allows both of us and the audience to interact with the paintings in a way that acknowledges our very contemporary presence.

Lee Coppack: Have the two of you worked together before?

Liam: Josephine and I have performed together before, but this is the first time she has written a piece for me.

Xavier: For me in the Gallery, it tied up with the simple idea of asking Liam to conceive a programme and come one evening and play his viola da gamba. He responded positively and also said that it would be great to bring in a composer and provide a new piece of music that would respond to Dou’s works. We then decided to have not just a series of concerts at the Gallery, but also a sound installation that will be playing in the mausoleum throughout the display. The idea is that you contemplate the pictures, and the absence of a live viola da gamba player.

Liam: This idea really struck with me, using the mausoleum as a kind of transportive space. You look at the pictures, and then almost have a dip in this sonic pool that will tap into your senses of memory and space. The sounds will give you a different perspective. Then you can look at the paintings again, feeling refreshed and may see some different things. The intention is not to have it as a piece where you stand for 20 minutes and listen from start to finish. The mausoleum is already such a special space with a strong sense of atmosphere and a very particular light.

Xavier: By separating the pictures and the music, people may not make the association directly. This is more evocative, and is probably more interesting for the public.

Josephine: What I am writing is a separate piece for the concerts, but that doesn’t mean there won’t be a connection between them.

Xavier: You have carte blanche to experiment. The viola da gamba is incredibly adaptable. This is what I’m hoping to experience when I’m in the mausoleum - to feel a connection with the Dou, but one that doesn’t have to be completely directly linked. Dou himself would have been in rooms where people played music. It is that atmosphere that I really would love to feel and provide an extra space around our pictures, an extra dimension as such.

Josephine: What struck me about the paintings is that the music-making that we see is very private affair. They’re not playing to entertain other people. It’s almost as though the painter is prying into their personal space. Was it usual for him to depict those kind of scenes? Or has he entered a forbidden world? I’m curious.

Xavier: That room is very likely to have existed. It might even have been an extension of his studio or of his home. Unfortunately, we don’t know who she is. But it’s very theatrical in the way that the curtain has been hooked to the far right and lifted up to reveal the scene within. So there’s a lot of artistic construction there. She looks at you and sort of invites you, perhaps to listen.

Liam: One of the things that I love about these paintings is that feeling of the drawing back of the curtain, showing us this moment. It reminds us that, much of seventeenth century music was not about the staging of a performance with discrete boundaries, but the sharing of music as a practise, a continuous thing which incorporates more atmospheric sounds: tuning, warming up and musical gestures that are more improvisational.

Lee: Josephine, how do you approach writing a piece like this?

Josephine: There is an immediate response you get from a picture itself as a physical object. The shapes of lines and contrasts have direct musical resonances. For me, especially in terms of structure, the essential difference is that a piece of music happens in time. I like to think of a narrative. That’s my way of approaching it, finding a story and telling it through the music.

Liam: I like the idea you had about the piece having kind of loose boundaries; we might feel like we are stepping into something that is already in progress. These paintings remind us that music wasn’t considered a museum object; it was integrated into an activity, into an afternoon.

Josephine: I love the fact that viols are present in both of the paintings, and not being played. Then we have Liam coming with his viol today and bringing them to life somehow. I want my piece to pay homage to these women improvising or playing very privately in the seventeenth century.

Xavier: We are looking at an abstraction of the sound that they would have created in their own very private and intimate space.

Josephine: Whoever played the viola da gamba, the fact that he or she is absent only emphasises the solitude or the very special moment of this woman on her own.

Read the full interview in the latest edition of In View magazine, available to buy at the Gallery. Alternatively, become a Friend of the Gallery and receive a copy three times a year.

Liam Bryne will be performing in concert 3 & 4 November. Click here to find out more information about the event and to book tickets.

The short track above is an excerpt from Liam Bryne's soundscape creation.