Unlocking the secrets of an eighteenth-century French clock

For a long time, the identity of the enigmatic figure standing behind the pendulum of the Dulwich clock has been a mystery. However, recent research has led to an important discovery about who this character could be. The answer may lie in the collection of the Louvre, Paris… In the Louvre is another, very similar, clock, which bears the same figure on its back panel. On that clock, the figure is distinctly visible: It is not a man, but a woman, and represents none other than the Roman goddess Minerva. The identification of this figure is key to unravelling the meaning of this richly decorated clock, which has been in the Gallery’s collection since its opening in 1817. 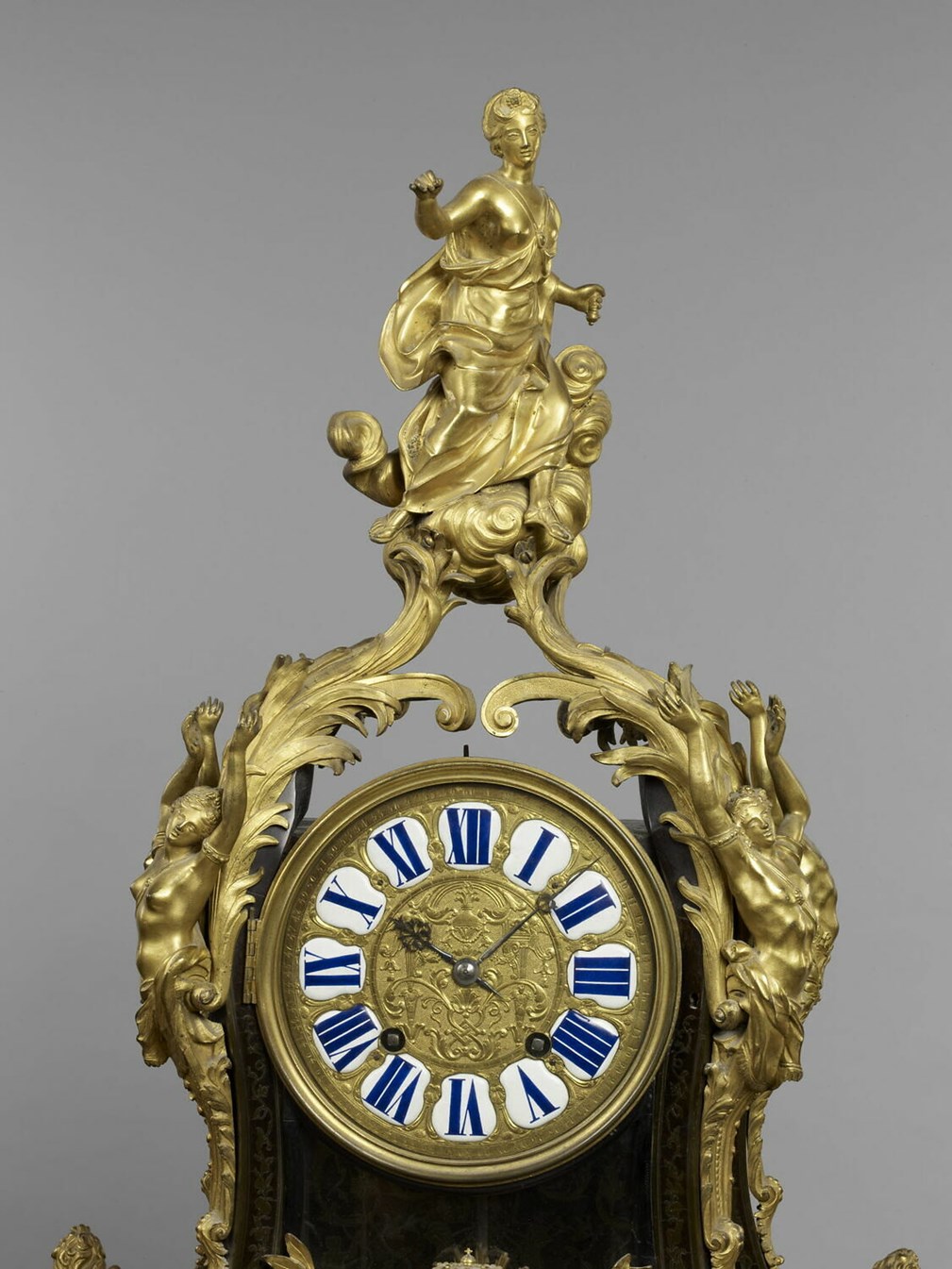 Minerva stands atop the clock in the Louvre

Minerva is the Roman equivalent of the Greek goddess Athena. She is the goddess of wisdom and strategic warfare, as well as of the arts and the handicrafts. She is contradictory by nature. At times depicted as a warrior and vengeful divinity, she most often reveals her-self as a wise and peace-loving figure. She is a protector of knowledge, who only resorts to war for just causes, with the aim of preserving peace. In the Dulwich clock, she appears with her attributes: the armour, spear and the owl, a symbol of wisdom and knowledge. In Roman mythology, Minerva is also credited for having created the olive tree, a symbol of peace, with which she is sometimes represented. This last attribute might also illuminate the identity of the winged figure sitting at the top of the clock, holding an olive branch, who is certainly an allegory of peace. At first sight, the four ormolu figures that appear on each corner of the clock appear to be almost identical. If you take a closer look, however, you notice that very fine, minute details set each apart, giving them an individual character. The figures represent the four seasons: the female figures on the left of the clock are spring, crowned with a floral wreath, and summer, whose hips are covered in fringed drapery and hair adorned with ears of corn. To the right are autumn, with vine leaves in his hair and winter, dressed in a warm mantle. The theme of the seasons was commonly employed in eighteenth-century art as an allusion to the passage of time and the eternally recurring cycles of life. But the figures of the seasons - taken together with the baskets of fruits, blossoms, vine leaves and overgrowing tendrils that surround Minerva and appear to creep onto the face of the clock - could also be a reference to the theme of abundance. When viewed as a whole, the Dulwich clock’s decorative elements present a strong message: one that illustrates the theme of abundance during times of peace. In the seventeenth and eighteenth centuries, this narrative was often rolled out by European monarchs eager to portray their reign as a source of peace, abundance and prosperity. As we have seen, Minerva, goddess of peace, was also a protector of the arts. Could the clock therefore be seen as a testimony of the splendour and abundance that peace, brings to the arts? There are still many questions to be answered about this clock but at last the identity of the mystery figure has been uncovered.

Sophie Anne Paoli is a curatorial placement student, undertaking a master’s degree in curatorial studies at the Courtauld Institute of Art.