In Remembrance of Ingrid Beazley 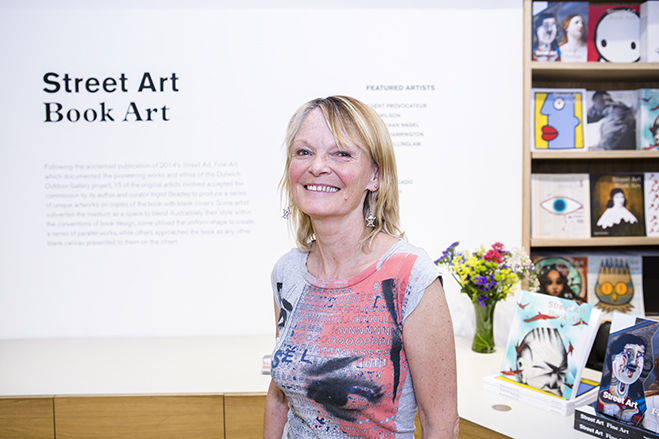 Ingrid Beazley, former Chairman of the Friends of Dulwich Picture Gallery from 2005 – 2008, and founder of the Dulwich Outdoor Gallery, has died aged 67. Ellie Manwell, Head of Communications and Audience Development, remembers her work with the Gallery.

I could never forget the first time I met Ingrid, she was such a force of energy and enthusiasm, rushing into the office with ideas for the Gallery’s social media activity. This was in 2008 when, believe it or not, cultural organisations had only just begun to see social media, almost exclusively Facebook back then, as a way to communicate. Ingrid was always ahead of the curve, always staying young in her outlook and as such was able to reach people that others could not. It was her passion. Her creation of the Dulwich Outdoor Gallery with the help of street artist Stik, has left the most inspiring mark on this area of South London – what could be a greater gift than to bring art to our streets – what could better fulfil the term ‘accessible’. Not only that but the Gallery itself always remained at the heart of the work, she brought these artists to the Gallery to be inspired by a collection of paintings that were also brought together with the public in mind. Over the last two weeks two of the artists from the project have been painting work situated at the Gallery itself – ‘Baroque the Streets’ coming full circle to find a place alongside the home of its inspiration.

Dulwich Outdoor Gallery and the associated book was a staggering achievement but Ingrid pioneered much beyond this through her work with the Gallery’s education department from large scale public events at the Gallery such as outdoor cinema and Gallery Lates to DiGIT, an interactive learning experience using early handheld palmtop computers. Once again the project took the experience of the Gallery beyond its four walls with pupils able to use the device at home and at school. As Chairman of the Friends Ingrid developed the Gallery’s first magazine, In View, followed soon after by Dulwich OnView, a local community news site covering the Gallery and much else beyond which won the ‘Best Small Website’ award at the International Museums and the Web conference in 2010.  Overall, Ingrid won 9 national and international awards for her work at Dulwich Picture Gallery.  In 2010, she was made a Fellow of the Royal Society of Arts, in recognition of her contributions to promoting the arts. She will be missed by many as her legacy brings joy to many more.

Two murals inspired by the Gallery’s Permanent Collection and painted by street artists RUN and Phlegm will be on display in the Gallery grounds until Friday 19 May. The hoarding will come down to reveal the Gallery’s first Dulwich Pavilion which will hosted a series of Lates generously supported by Ingrid Beazley.