Nikolai Astrup grew up in Jølster in the county of Sogn og Fjordane in Norway – in a landscape far removed from the large hubs, consisting of scattered farms around a scenic lake, and surrounding by high mountains. Although his father was a vicar, thus belonging to the village elite, access to classical music was minimal. There was a piano in the vicarage to be sure, and it is likely the children even learned to play on it. But the music that was most abundantly accessible was Norwegian folk music, in particular the type played on the the Hardanger fiddle. His father, the vicar, didn’t think much of it, not least because it was associated with drinking and sinfulness. But it was precisely for that reason his son was attracted to it. In Nikolai Astrup’s many Midsummer Bonfire pictures we can often see fiddlers and dancing couples. He was of course not allowed to take part in such festivities, but for the young boy who stood at a distance observing the whole affair, it seemed to stem from an ancient hedonist ritual that embodied the genuine Norwegian character, unaffected by later Christian mores. 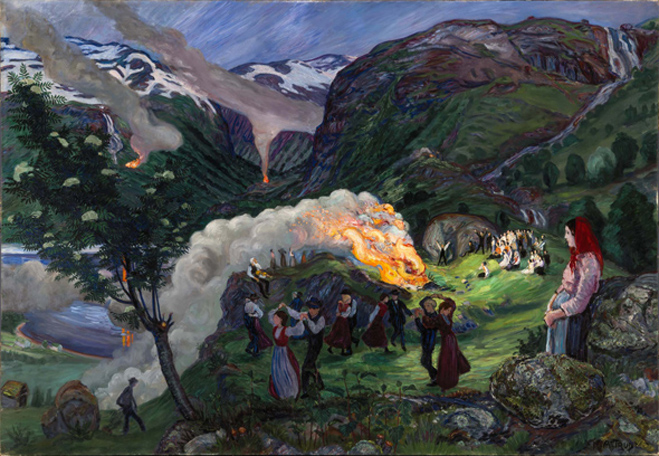 For Nikolai Astrup, Norwegian folk music was thus associated with powerful (and forbidden) experiences from his childhood and adolescence. The very experiences that he so often expressed in his paintings – not only the pictures depicting Midsummer bonfires, but also the many paintings of his childhood of Jølster, which had disappeared by the time he painted it years later.