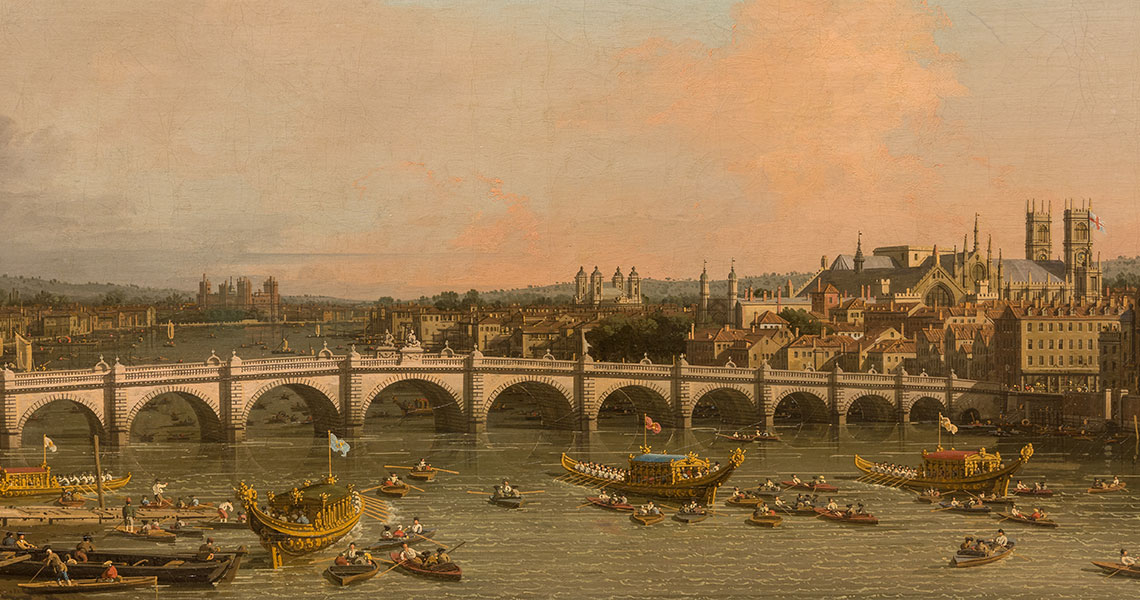 In November, Dulwich Picture Gallery welcomed a pair of Canaletto’s finest view paintings. Made during the artist’s visits to England from 1746 to 1755, the two works allow us to step back in time to an impression of eighteenth-century London, where beauty is privileged over gritty urban life.

Giovanni Antonio Canal, more commonly known as Canaletto, was born in 1697 in the Republic of Venice. Canaletto trained with his father, a theatrical scenery designer, before making a name for himself as a painter of highly detailed views or vedute. The artist’s reportial paintings proved popular with Italian patrons and foreign visitors alike, especially British aristocrats in search of souvenirs from their Grand Tour. With the help of an organised workshop, Canaletto developed a profitable business supplying paintings of lavish public ceremonies on Venice’s Grand Canal as quickly as they were commissioned.

In the mid-1740s, however, demand for his pictures slowed. The war of the Austrian succession spilled over into Italy, which had the effect of stopping foreign visitors travelling to the region. As a result, in May 1746 at the age of 49, Canaletto moved to London. He lived among the city’s small Venetian community in Silver Street, now Beak Street, on the edge of Soho, staying there for nine years, until 1755. 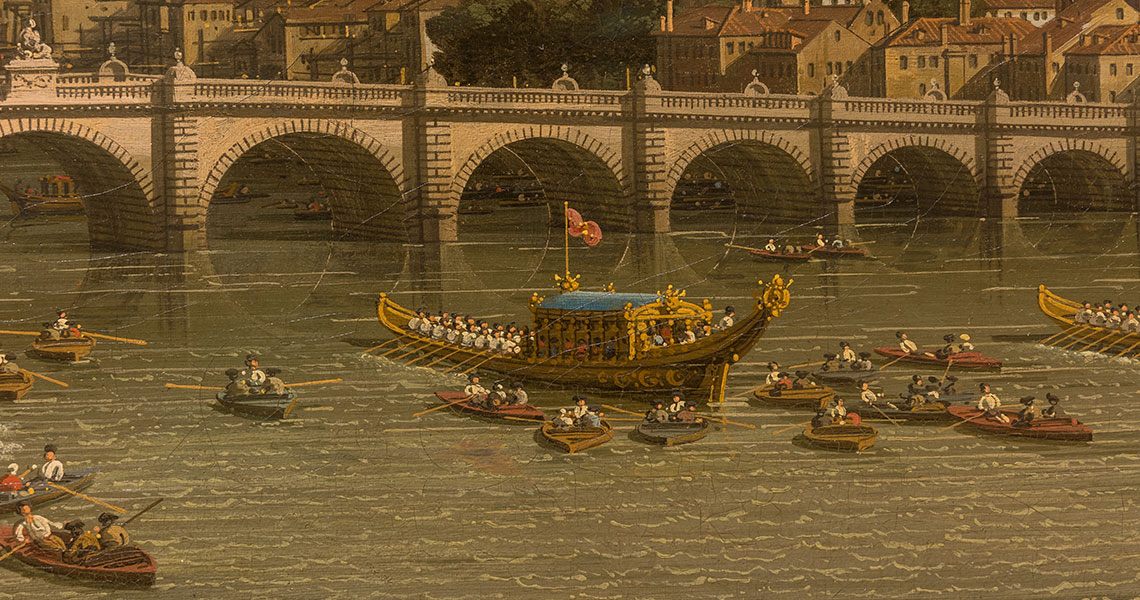 Canaletto painted over 48 views of London whilst in England. In Westminster Bridge, London from the north: The Master of the Goldsmiths Company’s Procession, Canaletto shows the excitement and splendour of the Goldsmith’s Company’s procession during Lord Mayor’s Day. This annual event took place in May when the city elected its new Mayor. The Thames is filled with four elaborately decorated City barges as well as hundreds of oarsmen. The first Westminster Bridge, which by 1746 was nearing completion, forms a backdrop to the lively activity on the river and the painting also allows us to admire some of London’s best architecture, including Westminster Abbey, the House of Commons and Lambeth Palace. 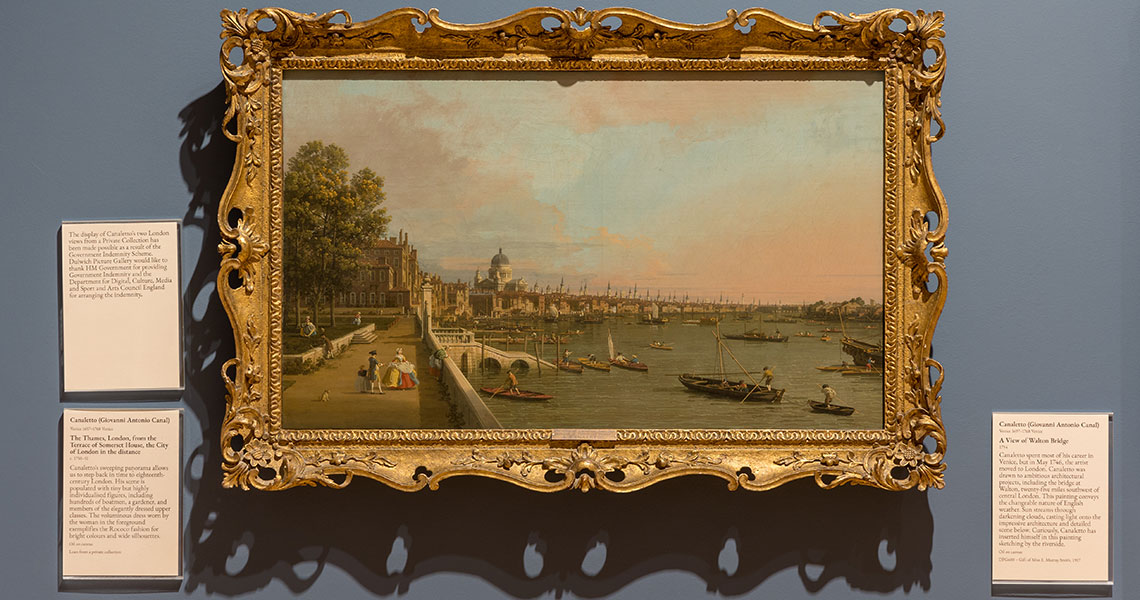 Canaletto, The Thames, London, from the Terrace of Somerset House, the City of London in the distance, c.1750. Photo: Graham Turner

Canaletto treats us to another sweeping view of the river in The Thames, London, from the Terrace of Somerset House, the City of London in the distance. The tall column of the Monument and the monumental bulk of Saint Paul’s Cathedral can be seen on the horizon. 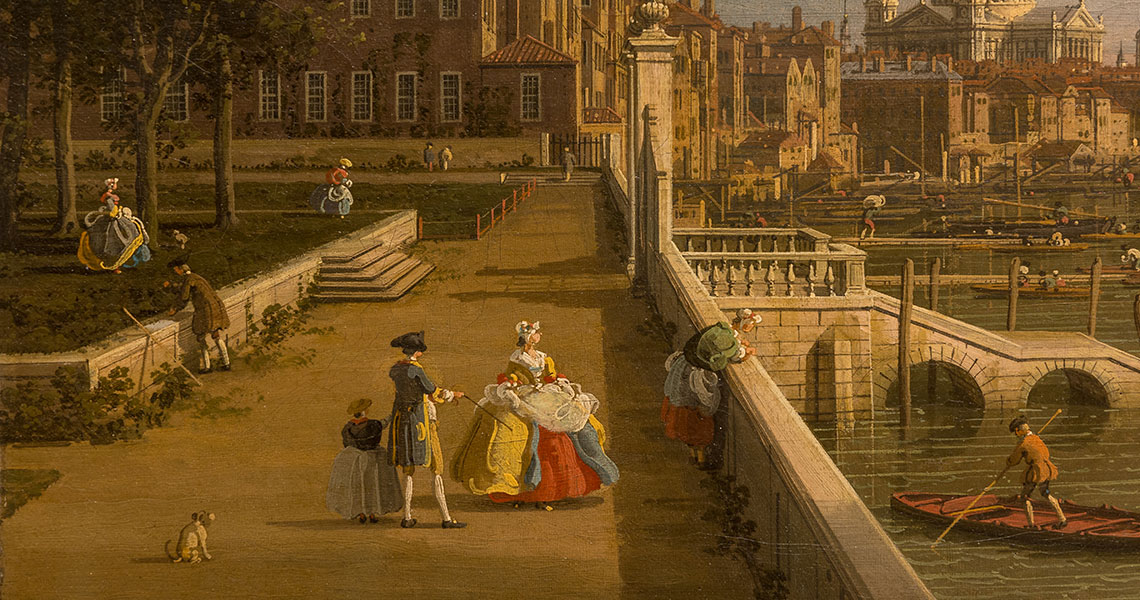 Canaletto, The Thames, London, from the Terrace of Somerset House, the City of London in the distance (detail). Photo: Graham Turner

The scene is also populated with tiny but highly individualised figures, including hundreds of boatmen, a gardener and members of the elegantly dressed upper classes. There are an uncanny number of windows, church spires and towers and both architectural and social developments are meticulously recorded, in miniature yet animated blobs, dots and lines.

In both paintings, Canaletto presents us with a version of London that is removed from reality. The sun is shining, the river glistening and the atmosphere more reminiscent of Southern Europe than the smog that would have hung over the city in the eighteenth-century. Yet like Canaletto’s Venetian paintings, both works provide a way for escape, into a world of beautiful grand vistas, gorgeous perspectives and expanses of blue of sky.

The paintings are on display in Gallery 11, alongside A View of Walton Bridge, 1754.