Rembrandt's Girl at a Window - A Trick of the Eye

Throughout 2016's run of "Making Discoveries" displays - exploring Dutch and Flemish artists in the Gallery's collection - our assistant curator, Helen Hillyard, will be writing a series of essays putting specific works in greater focus. In this essay Helen explores Rembrandt's mastery of optical illusion in 'Girl at a Window' to draw in the viewer's eye, inspired by our currently display Am I Rembrandt? This project is also being published with Smarthistory, a popular online learning resource for the History of Art.

A Trick of the Eye 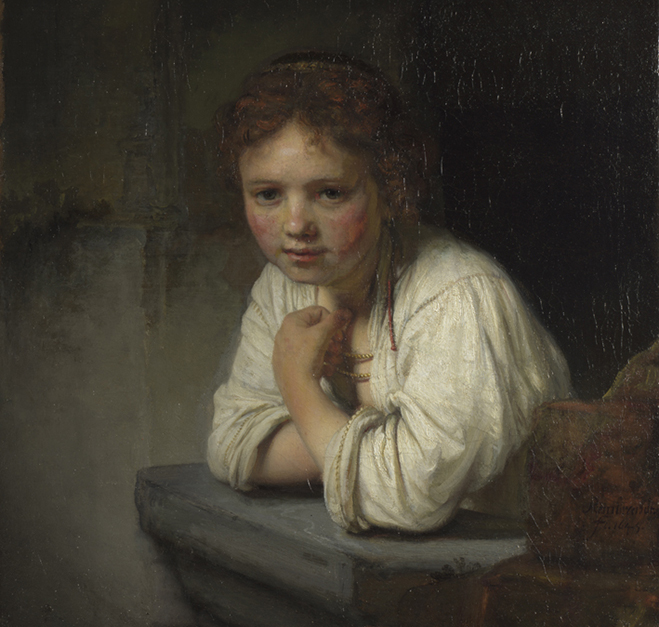 In Girl at a Window (Dulwich Picture Gallery, London) we see a young woman, possibly a servant girl, leaning on a stone ledge. She wears a loose-fitting white blouse, fastened with gold braid, her flowing curls crowned by a red cap. She has a rosy complexion, and the paint has been applied thickly impastoed paint. She inhabits a dark, ambiguous space, and it is unclear where she is located. What is most striking about the picture, however, is her very direct gaze. She looks straight at the viewer, drawing them into the picture; a fact underlined by the gesture she makes with her left hand, pointing towards herself. 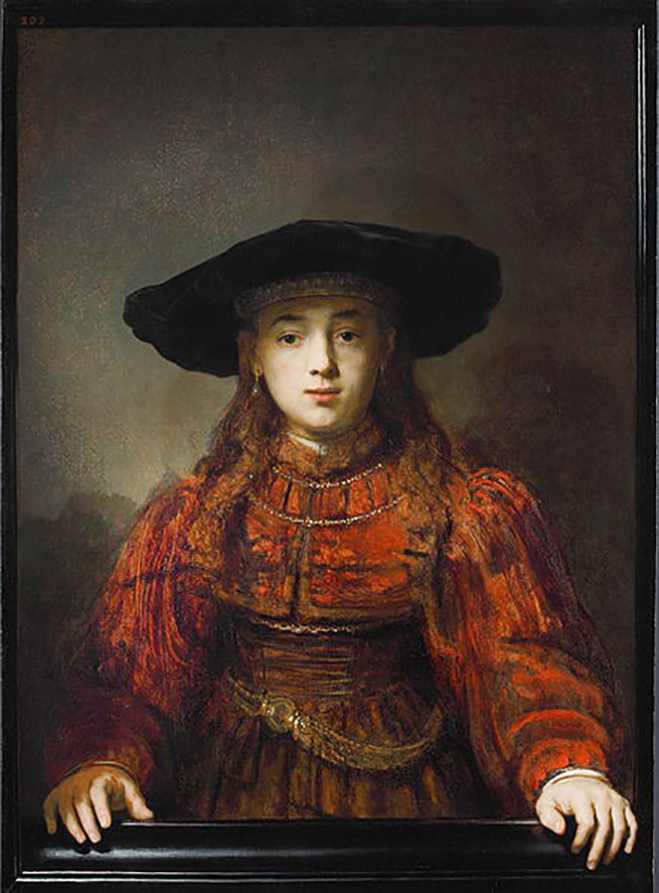 Rembrandt’s painting belongs to a type of picture made popular in the 16th and 17th centuries, in which the sitter appears to be entering the realm of the viewer - by leaning out of a window, reaching out a hand, leaning on a picture frame, drawing aside a curtain or stepping forward. Rembrandt and his pupils became particularly intrigued by the possibilities of trompe l’oeil (literally meaning to "deceive the eye") in the 1640s (Girl at a Window is dated 1645). Another particularly arresting example of this technique is his Girl in a Picture Frame (Royal Castle Museum, Warsaw), in which Rembrandt plays on the division between reality and the illusion of the painting.

According to the French art theorist Roger de Piles (1635-1709), who was also an early owner of Girl at a Window, Rembrandt placed the Dulwich painting behind one of the windows in his house and for a few days passers-by mistook her for a real girl. This anecdote has since been disproven; however, its message echoes the story of Zeuxis and Parrhasius. The two Greek painters staged a contest to determine who the greater artist was. Zeuxis painted a picture of a child carrying grapes and the picture was so realistic that birds were fooled into eating the grapes. Yet, when Parrhasius asked Zeuxis to draw back a curtain to reveal his own painting he realised to his humiliation that the curtain was an illusion; at this point Zeuxis conceded that Parrhasius was the better painter. The significance of this story is to suggest that a good artist can paint realistic animals or objects but only a great artist, like Parrhasius or Rembrandt, can deceive people (or indeed other artists). 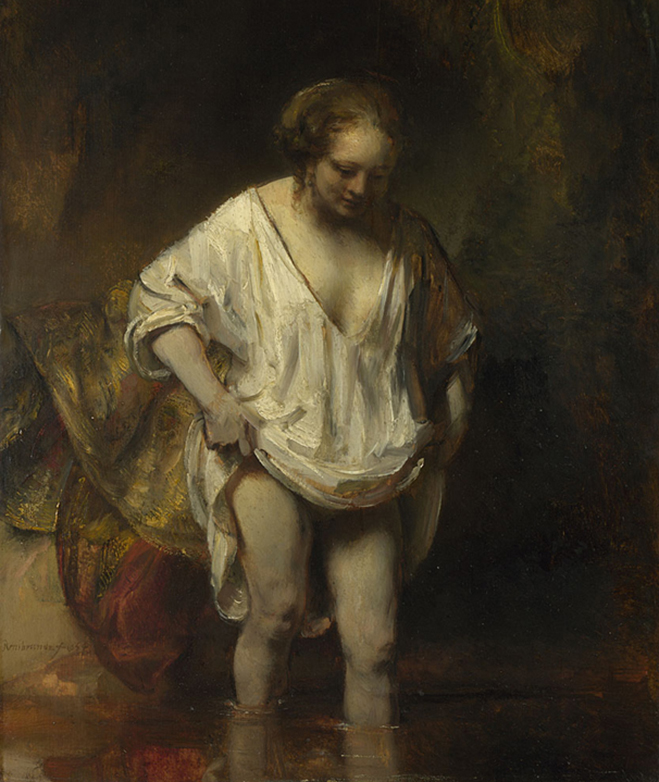 Numerous attempts have been made to interpret the subject of Girl at a Window and the identity of its sitter. Hendrickje Stoffels - see A Woman bathing in a Stream (Hendrickje Stoffels?) (National Gallery, London) - Rembrandt’s longtime lover after the death of his first wife Saskia has been suggested as a possible model. Yet, Hendrickje would have been 19 in 1645, perhaps too old to be the girl depicted. It has been suggested that the girl may represent a biblical or allegorical figure, perhaps an Old Testament heroine. Her white blouse, with its gold braid, is not the typical attire for a servant and is more likely a kind of fantasy clothing, similar to that worn by other figures in Rembrandt’s history paintings. This type of clothing gives the figure a romantic and timeless quality, suggestive of the past (even if not historically accurate). During the recent conservation of this painting, the discoloured varnish was carefully removed, revealing a bold mixture of colours in the model's face. Rembrandt often applied his paint with palette knifes as well as his fingers. 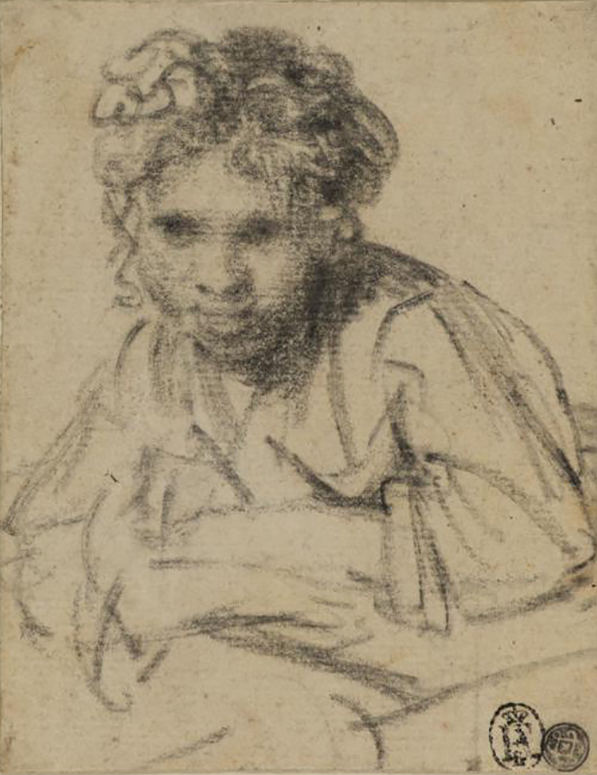 The only surviving drawing for Girl at a Window (The Courtauld Gallery, London) is drawn from life and sketched confidently using just a few expressive strokes of graphite. The differing position of the girl’s arms in the drawing indicates that the study does not derive from the painting but was in fact produced during its development.

Find out more about current exhibition Am I Rembrandt? here.