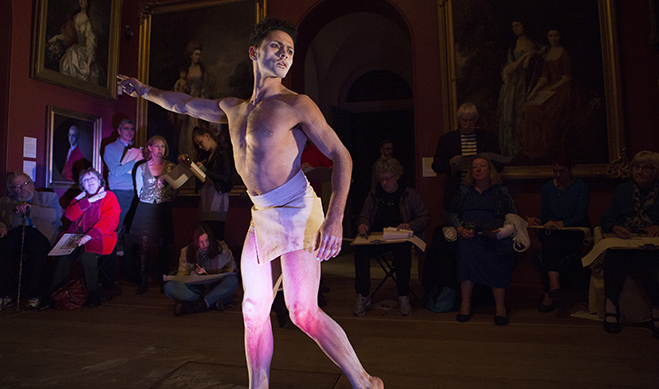 Award-winning dancer, choreographer and Rambert alumni, Dane Hurst, will bring a newly commissioned contemporary dance piece to the spaces of Dulwich Picture Gallery this September. The work will bring to life the tension and energy of Winifred Knights’ apocalyptic masterpiece, The Deluge, currently on display as part of Winifred Knights: 1899 - 1947.

Following the success of last year’s sell-out performances of Prud’hon: The Moving Body, Dane Hurst & Company return with Exodus (6-11 September), inspired by the narrative and characters within Knights’ contemporary depiction of the biblical flood. The performances will capture the dramatic movement of the fleeing figures, their individual stories and the ensuing sense of chaos.

Through a series of intimate vignettes located around the Gallery, the audience will be invited to tailor their own theatrical experience during the first half. In the second the dancers will come together in a climactic dance performance down the Gallery’s central space; a physical portrayal of the dramatic tension and energy of the painting. Materials will be provided on entry should guests wish to capture memories of the evening through life drawing.

The vignettes have been created by Hurst to a selection of compositions from ‘Floodplain’, an energetic and powerful album by the award-winning Kronos Quartet; which mirrors the desperation of the characters depicted in The Deluge.

This unique event has been created exclusively for Dulwich Picture Gallery by Dane Hurst in collaboration with an eclectic team of creatives including set designer Natalie Favaloro and costume designer, Nicolai Hart Hansen.

Dane Hurst
Dane Hurst joined the Rambert Dance Company as the first recipient of the Sally Gilmour Memorial Trust award in 2004 and has made guest appearances with Phoenix Dance Theatre, National Dance Company of Wales and The Curve Foundation. He has been nominated for awards by the Critics' Circle National Dance Awards in 2006 and 2013 and received the 2007 Spotlight Male Dancer of the Year Award. Dane was voted 3rd by an international jury of dance writers and critics for Dance Europe Magazine's Top 100 Dancers of the year 2012, and later received the Best Male Dancer of the Year Award in January 2014 as voted by the Critics' Circle National Dance Awards, London, U.K.

As a choreographer, Dane won the MAMAs Award with Kira Zhigalina for the Kinetika Art Fair 2012 and has received choreographic commissions from Rambert, The Place Prize, The Barbican, RichMix, InTransit Festival, Stuttgart International Solo Dance Theatre Competition and Wilton's Music Hall. He has performed his choreographic works at the Carriageworks Theatre - Leeds, Peacock Theatre and Lilian Baylis – Sadler’s Wells, Robin Howard Theatre, Queen Elizabeth Hall, Linbury Theatre - Royal Opera House, Wilton's Music Hall, The Commonwealth Institute and the Hall for Cornwall - Truro. He has graduated with a Master's Degree in Choreography from the University of Kent and Central School of Ballet in 2014 and performed as an actor and choreographed for the film 'Primitive', directed by Tom Rowland with screenings at RichMix - London, June 2014 and at the 43rd Dance on Camera Festival, Lincoln Centre in New York, January 2015.

Dulwich Picture Gallery
Dulwich Picture Gallery is England’s first purpose-built public art gallery, founded in 1811 and designed by Regency architect Sir John Soane. It houses one of the finest collections of Old Masters in the country, especially rich in French, Italian and Spanish Baroque paintings and in British portraits from the Tudor period to the 19th century. The Gallery’s permanent collection is complemented by its diverse and critically acclaimed year round temporary exhibitions.