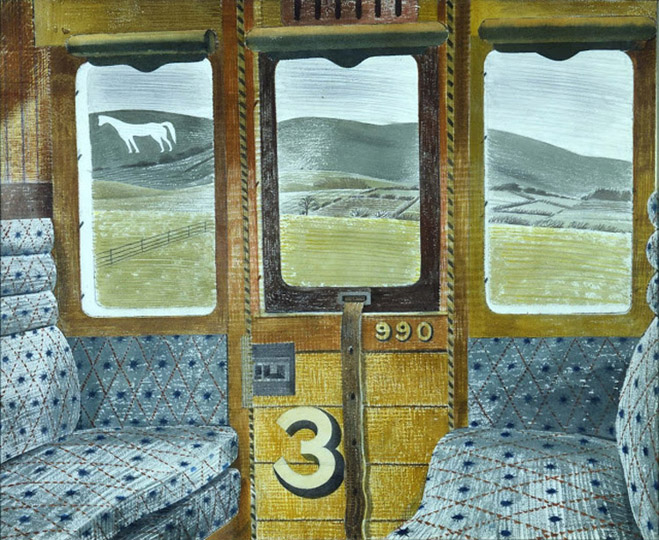 Dulwich Picture Gallery will present a major show of work by the celebrated artist and designer, Eric Ravilious (1903-42) with a unique focus on his output as a watercolourist. Featuring iconic paintings such as Westbury Horse (1939) and Train Landscape (1940) alongside rarely seen works from private collections, ‘Ravilious’ (1 April-31 August 2015) will follow the evolution of a remarkable talent and cement the artist’s position as one of the finest watercolourists of the 20th century.

This exhibition will adopt a thematic approach to a career which spanned peace and war, breaking down the chronology which often separates the two periods. This will highlight how Ravilious integrated rather than abandoned many of his ideas and instincts when he was appointed as an official War Artist in 1939. A focused selection of over 90 watercolours, complemented by selected lithographs, wood engravings and archive materials, will highlight common characteristics in Ravilious’s painting, ultimately bringing us closer to understanding the motives and ideas of an artist who famously said little about his work.

From a boyhood spent in his father’s antiques shop to being taught by Paul Nash at the Royal College of Art, various experiences influenced Ravilious’s style and adoption of particular motifs. The exhibition starts with ‘Relics and Curiosities’: paintings which reveal Ravilious’s fascination with interesting objects such as in No. 29 Bus (1934) and Talbot-Darracq (1934). This theme is revisited in the rarely displayed nautical still life Anchor and Boats, Rye (1938) and later in wartime paintings such as Bomb Defusing Equipment (1941) where he approaches military hardware from unusual angles to capture the strangeness of objects.

‘Interiors’ highlights another thread to Ravilious’s work where neatly made beds, empty chairs and patterned wallpaper recur in his paintings Farmhouse Bedroom (1930) and Interior at Furlongs (1939). Ravilious's domestic scenes rarely contain figures and yet his shadowy interiors, strange perspectives and objects often create a sense of human presence. Ravilious excelled in balancing interior and exterior worlds, an element that recurs in his wartime pictures such as The Operations Room (1942).

The exhibition continues to emphasize common themes in Ravilious’s oeuvre; ‘Figures & Forms’ highlights Ravilious’s rare but sensitive portrayal of people, such as in his studies for the mural for Morley College (1928-1930) and in his timeless visual records of men at war. In ‘Place and Season’ we see how Ravilious often combined topography, atmospheric conditions and light to record the often unusual locations he travelled to and in ‘Changing Perspectives’ we follow the evolution in Ravilious’s handling of composition and perspective, as he moves from more novel subjects to painting well known landmarks such as the White Horse of Westbury.

The exhibition culminates with an exploration of the artist’s career-long interest in light. Displaying the fireworks of November 5th (1933) next to the gunflashes of HMS Ark Royal in Action (1940), reveals how Ravilious treated both as exciting visual spectacles. In moving from peacetime paintings such as Rye Harbour (1938) to wartime works such as Midnight Sun (1940), we follow the artist on a journey of discovery as he sought new ways to capture the light of early morning.

“This exhibition has given me the opportunity to look more closely at familiar paintings, and to explore others for the first time. I love Ravilious's playfulness, and the subtle, surreptitious use of distorted geometries in his paintings, and the fact that he made so little public comment about his own work. In some ways this has made my job more difficult, but at the same time it is liberating: anyone can enjoy the work of Eric Ravilious, but there is also plenty there for people who want to go deeper”

While acknowledged as a fine wood engraver and designer, Ravilious saw painting as his true vocation; it was this work that he exhibited, and he cared deeply about its reception by fellow artists. His 1939 show, at the prestigious Tooth and Sons’ Gallery in London, was greeted warmly by critics, who described his work as ‘almost untranslatable’ and ‘magic, almost mystic’. Two-thirds of the twenty-seven paintings displayed are included in the exhibition.

The exhibition is curated by James Russell, a leading specialist on Eric Ravilious. A passionate advocate of 20th century British painting and design, James writes and lectures widely. His books include the popular four-volume series ‘Ravilious in Pictures’ as well as titles devoted to Edward Seago, Peggy Angus and Paul Nash.

Loans have been secured from a number of lenders including Towner, The Fry Art Gallery, Aberdeen Art Gallery, Imperial War Museum, Tate, Leeds Museums and Galleries, Royal College of Art, The British Council, as well as multiple private lenders.

With Philip Wilson Publishers, Dulwich Picture Gallery will produce a fully illustrated colour catalogue to accompany the exhibition. Author James Russell explores the evolution of a remarkable talent and offers an intimate portrait of the artist, making this a definitive guide to the luminous, evocative and timeless watercolours of Eric Ravilious.

Eric Ravilious
Born in London in 1903, Ravilious grew up in Eastbourne, where he attended Eastbourne School of Art before winning a scholarship to the RCA in 1922. Returning to teach at his old school, he met Tirzah Garwood, a talented student of wood engraving. They married in 1930 (the same year that Ravilious won acclaim for his murals at Morley College in London), moved to rural Essex and had three children. While working as a commercial designer and book illustrator, Ravilious held successful exhibitions of watercolours in 1933, 1936 and 1939, before being appointed an official war artist in early 1940. Working first with the Royal Navy and then with the RAF, he travelled around Britain and to Norway. Much inspired by the Arctic he flew to Iceland in September 1942, but was lost when his plane crashed shortly after arrival.

Dulwich Picture Gallery is the world’s first purpose-built public art gallery, founded in 1811 and designed by Regency architect Sir John Soane. It houses one of the finest collections of Old Masters in the country, especially rich in French, Italian and Spanish Baroque paintings and in British portraits from the Tudor period to the 19th century. The Gallery’s Permanent Collection is complemented by its diverse and critically acclaimed year round temporary exhibitions.