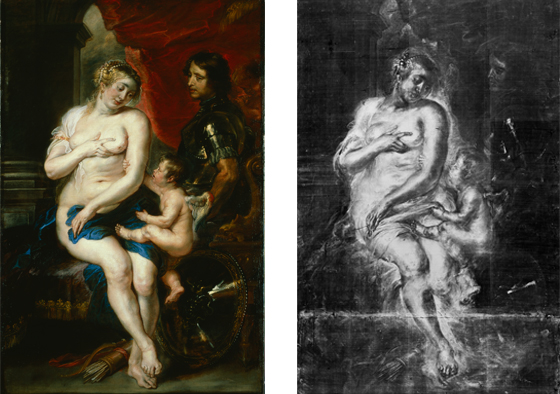 Rubens’ Ghost (26 April - 3 July 2016), the second display in Dulwich Picture Gallery’s Making Discoveries series, will offer a unique insight into the ideas and working methods of the Flemish baroque painter, Peter Paul Rubens, focusing predominantly on the changes the artist made to his painting Venus, Mars and Cupid, c.1635. Mounted on a lightbox and installed at the end of Dulwich’s enfilade, will be a life size X-ray- a ghostly image combining the work’s past and present states.

“X-rays of paintings are normally kept within a museum’s conservation department for the scrutiny of a select few. Now the public will be able to see beneath the surface of Venus, Mars and Cupid and better appreciate the challenges Rubens was confronted with when devising his composition. The position of Cupid, for example, clambering onto Venus’s leg as he holds onto her drapery and opens his mouth to receive a jet of milk from her breast, posed a particular compositional problem for Rubens. Not being satisfied with one position, he changed it as he was working, a detail not appreciated until an X-ray was taken of the painting.”

An iPad in the Gallery will also allow visitors to explore other works by Rubens from the collection in more depth, including the way in which he recycled panels for The Miracles of Saint Ignatius of Loyola, c.1619. An X-ray for the painting shows two ghostly figures not present in the finished works. These are only seen clearly when the X-ray is turned 180°, indicating that Rubens painted over them before beginning again and, as such, they may represent an early idea for the same composition. Infrared reflectography, another technique that can look through multiple layers of paint, reveals now-lost elements of the composition in Hagar in the Desert, c.1630-2, such as an angel in the sky and the baby Ishmael lying on the ground.

Rubens’ Ghost is the second in-focus display in Making Discoveries: Dutch and Flemish Masterpieces, which kicked off with I am Van Dyck. The series will showcase four major artists from the Gallery’s collection: Van Dyck, Rubens, Dou and Rembrandt, and brings together recent historical and scientific research to reveal intriguing discoveries and celebrate the creative processes of these Dutch and Flemish Masters. Each display also draws connections with guest works from other institutions and private collections that have never been seen together before.

The series is curated by Dulwich Picture Gallery’s Arturo and Holly Melosi Chief Curator Dr Xavier Bray, with support from Assistant Curator Helen Hillyard. Lenders include the National Portrait Gallery, Hauser & Wirth, the National Trust as well as a number of private lenders.

The research for Making Discoveries has been achieved through a new catalogue for the Dutch and Flemish collection at Dulwich Picture Gallery, to be published in Autumn 2016. This will be the first comprehensive catalogue covering this part of the collection and will include over 220 paintings, detailing their provenance and historical significance.

The next display will be Dou in Harmony, which runs 5 July - 6 November 2016 and reunites the artist’s only two versions of women playing clavichords, last displayed together in 1665.

Dulwich Picture Gallery is one of the world’s first purpose-built public art gallery, founded in 1811 and designed by Regency architect Sir John Soane. It houses one of the finest collections of Old Masters in the country, especially rich in French, Italian and Spanish Baroque paintings and in British portraits from the Tudor period to the 19th century. The Gallery’s Permanent Collection is complemented by its diverse and critically acclaimed year round temporary exhibitions.

For high-res images:
Please subscribe to the Press Site
pressimages.dulwichpicturegallery.org.uk