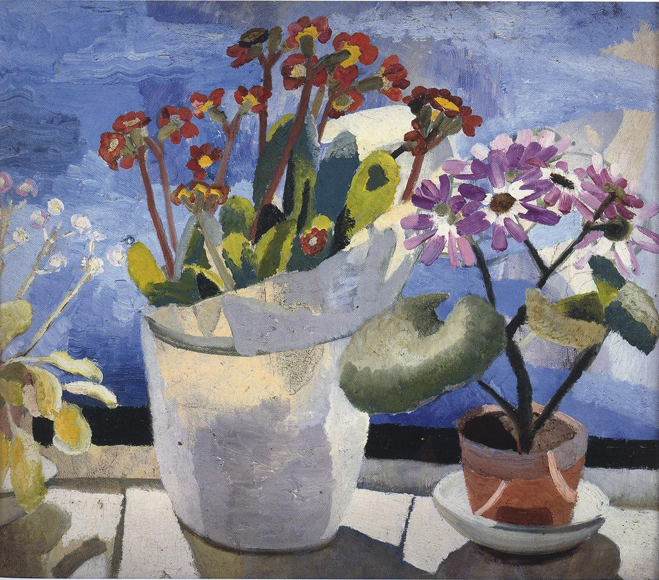 Dulwich Picture Gallery will present a major exhibition this summer including previously unexhibited or rarely seen early work by two of the UK’s most important 20th Century painters, Ben and Winifred Nicholson. Focusing on the couple’s prolific output during their ten year marriage it is the first show to consider their work in the context of a unique narrative of artistic influence and friendship with contemporaries Christopher Wood, Alfred Wallis and William Staite Murray.

Ben and Winifred Nicholson were at the forefront of the Modern British movement and produced some of the most memorable works of the period. Curated by Jovan Nicholson, grandson of Ben and Winifred, 'Art and Life: Ben Nicholson, Winifred Nicholson, Christopher Wood, Alfred Wallis, William Staite Murray, 1920 –1931' offers a rare opportunity to see the couple’s parallel views of the same landscapes, seascapes, still-lifes and portraits. Grouped by location, the show focuses on their time spent painting in London, Lugano, Switzerland, Cumberland and Cornwall and features work throughout by the artists they encountered and painted alongside.

The exhibition presents over 80 works, 15 of which are being displayed publicly for the first time, including Ben’s c. 1926-27 (still life) and Winifred’s Flowers in a Glass Jar. During their ten year marriage the couple often painted the same subject, Winifred as a colourist, Ben more interested in form. Ben’s 1924 (first abstract painting, Chelsea) and Winifred’s King’s Road, Chelsea were painted at the same time in Chelsea and highlight this difference in approach.

“It has been a surprise and delight to unearth so much new material and the exhibition includes many works that have not been seen in a Museum before. I have curated the show to create dialogues between juxtapositions of pictures and so reveal the affinities between the artists – this is most evident in the section on Cornwall where Ben Nicholson, Winifred Nicholson and Christopher Wood each responded to the meeting with Alfred Wallis in different ways - it was particularly pleasing to find two paintings by Alfred Wallis that belonged to Christopher Wood. For me it has been an enduring and deepening pleasure to come to know my grandparents work more closely. Most importantly I hope the show will bring much pleasure and enjoyment to the viewers.”

Throughout the 1920s Ben and Winifred’s approach was influenced by fellow artists and friends; Christopher Wood, who befriended the couple in London and who later stayed with them in Cumberland, the self-taught marine painter Alfred Wallis who the trio then chanced upon in St Ives and the potter William Staite Murray who exhibited with Ben and Wood from 1925 onwards.

Ben and Wood often painted the same landscapes and their paintings of Northrigg Hill, painted between 1928 and 1930 in Cumberland, will be displayed alongside Winifred’s earlier painting of the same scene for the first time. Wood later worked with the couple in Cornwall where he stayed in a cottage close by; his love for Cornwall can be seen in Pill Creek, Feock, Cornwall which also receives its first museum showing in this exhibition. Although the joint painting trips finished in 1928, Wood continued to paint and his growing interest in surrealism towards the end of his life is seen in the striking The Parachute and Zebra (1930), which he painted days before he took his own life in 1930.

A chance meeting in 1928 with Alfred Wallis in St Ives enhanced Ben and Winifred’s consideration of seascape, movement and proportion. Again the artists painted side by side, taking inspiration from Wallis’ exquisite paintings made from pieces of old crates and boat paint. Works such as The Schooner the Beata, Penzance, Mount’s Bay and Newlyn Harbour and Four Luggers and a Lighthouse provide a fascinating contrast to the group’s oils and drawings.

Throughout the show, ceramics by the avant-garde potter William Staite Murray will be displayed alongside the artists’ paintings and drawings, including Cadence and Persian Garden. Inspired by the Nicholsons in his approach to aesthetic pottery, his works are as much influenced by their art, as their paintings are by his pots.

The exhibition is curated by Jovan Nicholson, an Art Historian who has worked on various projects with the Henry Moore Foundation, the Barbican Art Gallery and the Russian Museum, St Petersburg. He is a grandson of Ben and Winifred Nicholson. Loans have been secured from major national collections including Leeds Art Gallery, Kettle’s Yard, Tate, York Museums Trust, National Gallery of Scotland, Brighton and Hove Museums; and important and rarely seen works from a number of private collections. A major full colour catalogue accompanies the exhibition, comprised of essays by Jovan Nicholson, Sebastiano Barassi and Julian Stair, published by Philip Wilson Publishers. It will present archival photographs, the majority unpublished and coming from private collections.

Ben Nicholson (1894–1982) was born in Denham, Buckinghamshire, and was the son of the artists William Nicholson and Mabel Pryde. He studied at the Slade School of Art, 1910-11. He married Rosa Winifred Roberts in 1920, with whom, for the next fifteen years, he would form a mutually influential partnership. Even after their divorce in 1938 they continued a lively correspondence exchanging ideas. During this period he began painting figurative and abstract works inspired by Post Impressionism and Cubism. He produced his first geometric and abstract reliefs in 1933. His work came to be seen, with Henry Moore's, as the quintessence of British modernism.

Winifred Nicholson (1893-1981) was born in Oxford as Rosa Winifred Roberts. She was the granddaughter of George Howard, 9th Earl of Carlisle, an amateur painter and friend of the Pre-Raphaelites. She studied at the Byam Shaw School of Art, and married Ben Nicholson in 1920 shortly after a visit to India. Winifred is best known for painting flowers, which she used to convey her ideas about colour. By the late 1920s she was widely respected in the London art world, with solo exhibitions at the Beaux Arts Gallery in 1927 and the Leicester Galleries in 1930. After her marriage with Ben Nicholson came under strain she moved to Paris in 1932 and befriended and collected a number of Parisian artists, including Mondrian, Gabo and Hélion.

Dulwich Picture Gallery
Dulwich Picture Gallery is the world's first purpose-built public art gallery, founded in 1811 and designed by Regency architect Sir John Soane. It houses one of the finest collections of Old Masters in the country, especially rich in French, Italian and Spanish Baroque paintings and in British portraits from the Tudor period to the 19th century. The Gallery’s Permanent Collection is complemented by its diverse and critically acclaimed year round temporary exhibitions.

Art and Life: Composition and Colour
Six Saturdays from 7 June to 5 July
Six Saturdays from 20 September to 25 October
10am – 1pm
£90 / £85
Focus on the Art and Life exhibition to create personal pieces paintings inspired by
your own life experience. Experiment with colour and composition referring to
spatial devices to manipulate space like used by the St. Ives artists past and present
with artist Rebecca Allen

Art and Life: Wood Engraving
Six Saturdays from 20 September to 25 October
10am – 1pm
£90 / £85
Discover this traditional method of relief printmaking and create exquisitely
detailed images. Explore each fascinating stage of the process and use the abstract
paintings of Ben Nicholson as inspiration for your designs with wood engraver
Peter Brown

Art and Life: Discover Still Life
Five Tuesdays from 3 June to 1 July
10am – 12pm
£55/£50
Explore still life with a focus on colour, shape and natural form taking inspiration
from the exhibition Art and Life. Explore a range of drawing and painting
techniques to create dynamic still lifes with artist Jo Lewis

Art and Life: Alfred Wallis - on the Thames
Five Tuesdays from 16 September to 14 October
10am – 12pm
£55 / £50
Take a voyage with Alfred Wallis whose love of boats and the sea was expressed
in his work. Wallis painted on anything to hand,
such as cardboard or brown paper. Work in paint and collage with artist Liz Charsley-Jory