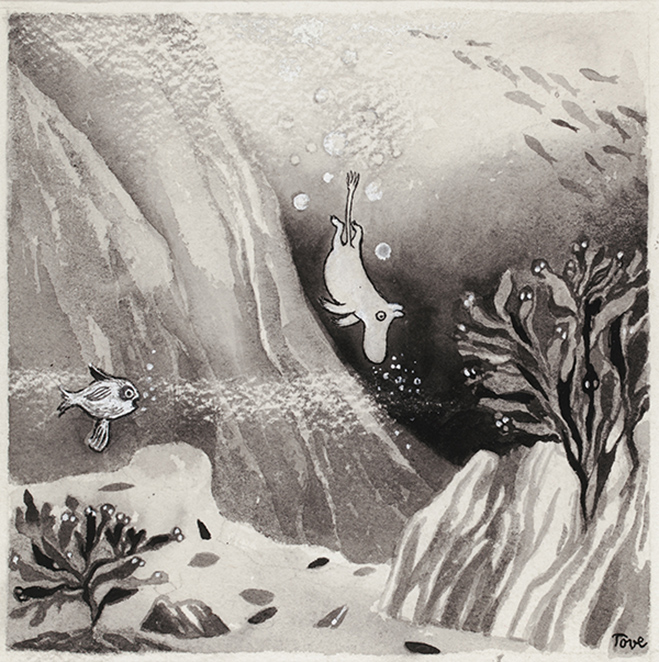 Dulwich Picture Gallery will present the first major UK retrospective of work by one of the most celebrated illustrators of the 20th century, Tove Jansson (1914-2001). Known internationally as creator of the Moomin characters and books, a phenomenon which continues to stretch across generations, Jansson’s wider outputs of graphic illustration and painting are relatively unseen outside her home country of Finland.

‘Tove Jansson’ will bring together 150 works to reintroduce Jansson as an artist of exceptional breadth and talent, tracing the key stages of her prolific career including her surrealist-inspired paintings of the 1930s and abstract work of the ‘60s, her satirical anti-war cartoons and book jacket designs, as well as a comprehensive display of early sketches for the Moomin characters and original comic strips.

The exhibition opens with Jansson’s self-portraits, landscapes and still-lifes, many of which have never been seen before in the UK. Although Jansson worked with various different media throughout her life, she always considered herself primarily a painter. Works such as Mysterious Landscape, 1930s, reveal her early fascination with storytelling and colour whilst a key selection of self-portraits painted during the 1930s and ‘40s allow us to interpret the emotional climate of the different stages of Jansson’s life. The Smoking Girl, 1940, shows Jansson as defiant and challenging, depicting a moment of deep concentration, whilst two years later in Lynx Boa (Self Portrait), 1942, the expression is softer and calmer, yet full of courage and self-esteem.

During her first decades as an artist, Jansson produced an astonishing variety of illustrations. At the young age of 15, her already formidable talent for caricature caught the attention of the liberal political satire magazine, Garm, and she went on to draw more than 500 caricatures and 100 cover images for them. In contrast to her paintings, Jansson eagerly captured the ravages of war in her illustrations, employing them to such an extent that the political cartoons she published openly under her own name were quite daring. A display of illustrations will reveal Jansson’s boldness and staunch opposition to war, fascism and totalitarianism.

Illustrating for Garm provided Jansson with the experimental space to introduce the first resemblance of Moomintroll who appeared as the long snouted troll, ‘Snork’ in 1943. He would have frequent cameo appearances in her future drawings for the magazine, appearing in the sidelines or embroiled in the cartoon itself.

The Moomin characters brought together Jansson’s gifts as an artist with her fluency as a writer. Jansson began writing stories about the Moomins during the war. As early as the 1930s she had drawn Moomin-like figures that were black and thin, with red eyes, whilst the Moomins we know today are rounder and friendlier in appearance. A display of original book illustrations for the series along with comic strips for the Finnish magazine, Ny Tid and the widely read, The Evening News, will provide an insight into the genesis of the Moomin phenomenon. It will also highlight key influences on the subject and the development of Jansson’s illustrations including her experience of the war and the Jansson family dynamic.

“It was hugely important to Tove that she be recognised as a talented fine artist in addition to being the creator of the Moomins. Balancing her painting and her other projects alongside the demands that the Moomins made of her was something she struggled with all her life. I’m delighted that Dulwich Picture Gallery is putting on this exhibition which will make Tove’s wider artistic output accessible to a UK audience, who may not yet be familiar with her work outside of Moominvalley.”

“In Europe and the world today, Tove’s art and stories are more relevant than ever. Her entire oeuvre and way of thinking are characterised by the acceptance of differences. Although the family circle – both the artist’s own and the fictional Moomin family – is central, the door is always open for those seeking shelter. Tove Jansson’s works convey a profound understanding of human diversity. This show will reveal fascinating new insights into a colourful life and the work that came out of it.”

The exhibition is organised by the Ateneum Art Museum / The Finnish National Gallery. It is curated by Sointu Fritze, Chief Curator, Ateneum Art Museum, Helsinki. Loans come from public and private collections with a large selection from the Moomin Museum.

A full colour catalogue will accompany the exhibition opening up new and fascinating perspectives on Jansson’s life and work. Essays have been written by renowned Tove Jansson experts; Tuula Karjalainen, Finnish Art Historian, Boel Westin, author of Tove Jansson Life, Art, Words, Frank Cottrell-Boyce, screenwriter and novelist and Paul Gravett., writer and broadcaster who has worked in comics publishing since 1981.

‘Tove Jansson’ follows in the footsteps of major graphic artist and illustrator shows at Dulwich Picture Gallery which have shone a new light on major artists including David Hockney, M. C. Escher and Norman Rockwell.

Biography
Tove Marika Jansson was born in 1914 in Helsinki to the graphic artist, Signe Hammarsten and the sculptor Viktor Jansson. She grew up with her two brothers Per Olov (b. 1920) and Lars (b. 1926) in an ambitious artistic family, living and breathing art. The open-minded, bohemian atmosphere encouraged the talented young Jansson to search for her own artistic expression, which produced striking results with intuitive certainty from an early age.

In the midst of the mass bombings of Helsinki in 1942, Jansson managed to get an attic studio in the centre of the Helsinki. The studio became her cherished home, a source of power and a haven, where she created her most renowned paintings and texts. It was there that Jansson finished her first story featuring Moomintroll. The Moomins and the Great Flood (1945) was the first volume in the series that was to become the most prominent and best-known part of Jansson’s career as an artist. As a writer, Jansson did not want the stunning success of Moomins to limit her freedom either. After Moominvalley in November (1970), it was time for something new. In 1968, she had published the childhood description Sculptor’s Daughter for adult readers, but it was the acclaimed collection The Listener (1971) that showcased her as a short story writer for the first time.

Jansson’s studio in Helsinki was dedicated for work, but since her childhood, she had fallen in love with the sea and archipelago. She spent many summers on the tiny island of Klovharu in the Gulf of Finland. There and in her frequent travels abroad, she was accompanied by her life partner Tuulikki Pietilä (1917 - 2009), graphic artist and professor.

About Moomin Characters:
Oy Moomin Characters Ltd is the owner, originator and official company responsible for supervising and managing the Moomins’ brand, copyright and registrations. The company was started in 1958 by Tove Jansson and her brother Lars Jansson and even today is run by family members. Sophia Jansson, Lars’s daughter and Tove’s niece, is Chairman of the Board and Creative Director at Moomin Characters. All characters from Moomin Valley are registered trademarks.