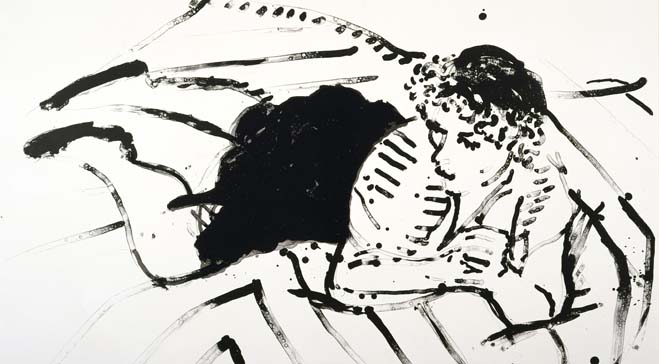 Portraits of textile designer Celia Birtwell will be on display during Dulwich Picture Gallery’s major exhibition ‘Hockney, Printmaker’ (5 February- 11 May 2014). The show is timed to coincide with the 60th anniversary of David Hockney’s first print, and will provide an instructive and entertaining overview of the artist’s career as printmaker. Grouped by theme and technique in a series of displays, the exhibition featuring over 100 works will include eight portraits of Celia created between 1973 and 1998.

Celia first saw Hockney in 1968 in Portobello Road, and later met him again through Ossie Clark who was friends with Hockney at the Royal College of Art. After this time she became a regular presence in the artist’s work, including his prints; of which she features in approximately 30, constituting about a quarter of his total printed portrait oeuvre. A shared interest in aesthetics and a fascination with each other’s work and style have drawn them together. Hockney said “She’s playful, funny. When I first met her, I was attracted to the fact that she could make me laugh, and that’s a very big appeal to me”

Hockney’s depictions of her show his attitude towards portraiture in general, that it should be based on a psychological insight into his sitters’ lives, hence his aversion to commissioned portraits. Hockney believes that you can only draw someone when you know them and the closer the relationship the better the portrait.

Many of the Celia portraits reference the private, domestic scenes of Matisse and late 19th century artists such as Degas, depicting women engaged in routine activities, dreaming or sunk in thought. The portraits of her included in the show span a quarter of a century, and we can see that as Hockney grew in confidence, they became increasingly vibrant, energetic and bold, such as An Image of Celia, State II (1984-86). He created his larger lithographs, such as Big Celia Print #2, using long-handled brushes and dilute lithographic inks. The drips and splashes attest to the speed with which the prints were executed; a refreshing contrast to traditional lithographic portraits, which often took  days to complete.

“We have always felt completely comfortable in each other’s company. We amused each other. I found posing for him to be a very intimate, and silent, affair…Before commencing we have a conversation about how he wants me to look. I could look left or right. He may say, ‘Move your arm.’ ‘Sit further back.’ ‘Look out of the window.’ then comes the moment when he suddenly says, ‘I like that.’ whilst he’s drawing me I can see the intensity, struggle and concentration on his face. The intensity is extraordinary. After an hour or so he’ll say, ‘do you want to take a break, luvvie?’ Sometimes I take a peek at the portrait, other times I prefer to wait until it’s finished. He always says he doesn’t appeal to vanity. Whatever my feelings are, they are always amazing.”

‘Hockney, Printmaker’ is curated by Richard Lloyd, International Head of the Print Department at Christie’s. Loans have been secured from key lenders including Salt’s Mill, Saltaire, David Hockney Inc., David Hockney Foundation, National Gallery of Art, Washington, National Gallery of Art, Canberra, Bradford Museums and Galleries, Tate and Private Collections. A fully illustrated colour catalogue published by Scala accompanies the exhibition and features an illuminating text by Celia Birtwell. It will explore the key themes in the exhibition in the context of the artist’s biography, together with texts from contributors such as Marco Livingstone, John Kasmin, Peter Tatchell and Martin Gayford.

David Hockney was born in Bradford, Yorkshire in 1937. He is perhaps the most popular and versatile British artist of the 20th and 21st century. He is a painter, printmaker, photographer and stage designer. He studied at Bradford School of Art and later the Royal College of Art where he featured in the exhibition Young Contemporaries—alongside Peter Blake—that announced the arrival of British Pop art. Hockney’s subsequent development was a continuation of his student work, although a significant change in his approach occurred after his move to California at the end of 1963 in search of the fantasy that he had formed of a sensual and uninhibited life of athletic young men, swimming pools, palm trees and perpetual sunshine. He has recently returned to his native Yorkshire, where he is engaged in depicting the landscape of the Worlds through the seasons.

Special Exhibition Lecture
Art as Autobiography: The Early Work of David Hockney
Sunday 9 March
11am-12pm
£9/£10
David Hockney’s Biographer and Hockney:Printmaker catalogue contributor Christopher Simon Sykes gives an exclusive insight into the artist’s childhood growing up in Bradford and his life up until he left the Royal College of Art in 1962

Hockney Printmaker: Love of Line
Five Tuesdays from 22 April to 20 May
£55 / £50
David Hockney’s prints demonstrate a love of line and sensitivity to materials and techniques. Taking this as a starting point, explore line drawing in printmaking with artist Jo Veever