Rediscovered Rembrandt masterpiece displayed in London for the first time 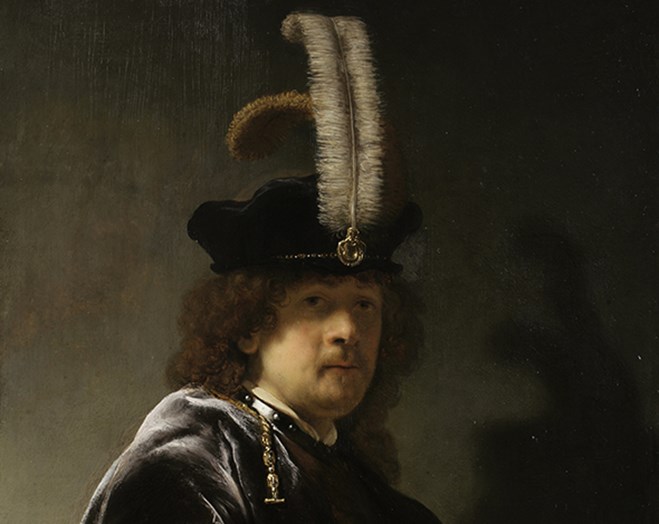 Am I Rembrandt? (8 Nov – 5 March 2017), the final display in Dulwich Picture Gallery’s Making Discoveries series will bring the Dutch Master’s flamboyant Self-Portrait, Wearing a Feathered Bonnet, 1635, (on loan from Buckland Abbey, National Trust) to London for the first time. The display will also delve deeper into the Gallery's own works by the painter with Girl at a Window, 1645, shown for the first time with its surviving preparatory study.

The status of the self-portrait as an authentic work by Rembrandt has been questioned in the past, but following extensive technical analysis and investigative work by the National Trust and leading Rembrandt specialists, it was firmly attributed to the Master in 2014. The self-portrait will inspire a wider display, exploring how curators and conservators worked together to authenticate the painting. It will also examine the authorship of other works by Rembrandt, acquired by the Gallery's founders in the late 18th century.

Dulwich’s paintings Jacob de Gheyn III, 1632, and Girl at a Window are undisputed works by Rembrandt that are often used as a standard by which to judge unsigned paintings from the same periods. Conversely, A Young Man, perhaps the Artist’s Son Titus, 1663, was previously doubted as a genuine Rembrandt due to its degraded condition, whilst Jacob’s Dream, 1710-15, was once a much admired Rembrandt until the restoration process revealed the signature of Rembrandt’s last pupil, Aert de Gelder. Seen together these works and accompanying analysis offer a special insight into the often challenging practise of attributing Old Master works, drawing upon a curator’s knowledge of the artist’s style; surviving documentation relating to the work’s history; and analytical investigations that reveal the artist’s materials and techniques.

Girl at a Window, one of the Gallery’s most celebrated works by Rembrandt, will be displayed next to the only known preparatory study for the work, on loan from The Courtauld Institute of Art (Count Antoine Seilern Bequest). This will be the first time both painting and study have been displayed together, revealing how Rembrandt transformed a quick graphite sketch, made from life, into the finished painting. Seen together, the works offer a unique insight into the artist's creative process.

Am I Rembrandt? is the final of four displays in the Making Discoveries: Dutch and Flemish Masterpieces series, which has thus far explored works by Van Dyck, Rubens and Dou in Dulwich’s collection. Bringing together recent historical and scientific research, the series has revealed intriguing discoveries, shedding new light on these familiar works. This research has been achieved through the recently published catalogue of the Dutch and Flemish paintings collection at Dulwich Picture Gallery, which will be launched on 10 October 2016. It is the first comprehensive catalogue covering this part of the collection and includes over 220 paintings, detailing their provenance and historical significance. It is available to buy online and from the Gallery shop.

Rembrandt Harmensz. van Rijn was undoubtedly the most famous Dutch painter of the 17th century.  Born in Leiden in 1606, the son of a mill owner, he registered at Leiden University in 1620 but soon left to begin an apprenticeship as a painter. As Rembrandt’s artistic practice grew he moved to Amsterdam, making a name for himself as a painter of history subjects. Rembrandt shunned the conventional practice for young painters to travel to Italy to study Italian artInstead, he felt that he could learn everything he needed to from the art available in the Netherlands. Although he received important commissions throughout his career, Rembrandt overstretched himself financially and was declared bankrupt in 1656; forcing him to sell his house and possessions. He died in 1669 without official notice of his death.

Related Events
Discovery Day: The Dutch Golden Age
Monday 10 October, 10.30am - 6pm
Join a panel of celebrated speakers for a captivating day exploring the Gallery’s renowned collection of Dutch and Flemish works. Find out how the Dutch and Flemish Collection came to be at the Gallery and learn more about distinctive paintings and topics surrounding the Dutch Golden Age.

In-conversation: Rembrandt's Feathered Bonnet
10 November, 7.30pm - 8.30pm
Join David Taylor, Curator of Pictures and Sculpture at the National Trust, and Conservator Tina Sitwell in a discussion of Rembrandt's Self-Portrait, wearing a Feathered Bonnet. Discover how the much-debated attribution of this painting, which was finally confirmed in 2014.