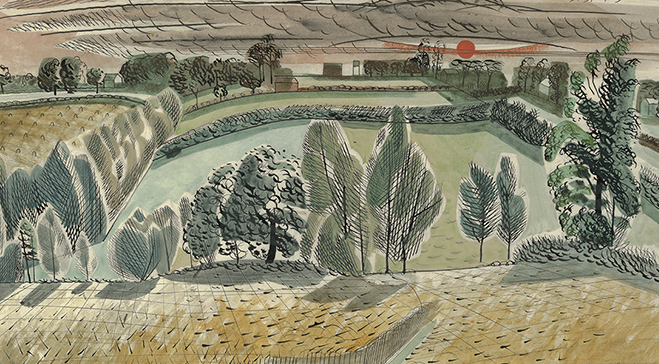 Dulwich Picture Gallery will present a major retrospective of work by the celebrated British artist and designer, Edward Bawden RA CBE (1903-89). It will be the most wide-ranging exhibition since Bawden’s death, and the first to look at every aspect of his 60-year career, showcasing a number of previously unseen works from the Bawden family’s private collection as well as 18 rarely seen war portraits, displayed together for the first time.

Widely respected as an innovative graphic designer, book illustrator and printmaker, Edward Bawden is best known today for his monumental linocuts and for the witty designs he made for companies like Shell and Fortnum & Mason. Meanwhile, his achievements as a fine artist have been largely forgotten. Along with Paul Nash and Eric Ravilious, Bawden reinvented watercolour for the 20th century, and a central aim of this exhibition is to bring this work back into public view.

Bawden was a creator of imaginary worlds, inspired by stories, travels abroad and by the everyday world. Featuring 170 works, half of them from private collections, the exhibition will be arranged thematically to follow the evolution in his style and the constant creative dialogue between media and disciplines, with rooms dedicated to leisure, architecture, animals and fantasy, as well as the previously unexplored theme of gardens. The exhibition also includes a number of studies that show Bawden’s working methods, along with personal letters revealing the relationship between his handwriting and his drawing, and the blotter from his desk across which a web of doodles evolves into patterns and shapes – displayed publicly for the first time.

Bawden took a tremendous delight in observing the world ‘off duty’, and the exhibition will open with a wide-ranging display of works devoted to leisure and pleasure, with a particular focus on Bawden’s talents in commercial design. Highlights include early designs for London Underground and Fortnum & Mason as well as book designs for companies such as Imperial Airways, and London and North Eastern Railway. These works show Bawden’s invention of new styles of lettering and bordering, which he combined with illustration in interesting and pleasing ways. This section will also showcase earlier paintings, such as By the Sea, 1929-30, a humorous vision of the British on holiday that shows Bawden’s delight in the everyday goings-on of ordinary people, as well as a giant map of Scarborough, illustrated with holidaymakers and mythical creatures.

The exhibition will display watercolours, engravings and linocuts on the theme of plants and gardens including Rain, 1926, on display for the first time. The play of contrasts between soft natural forms and the hard geometry of buildings added drama to many Bawden compositions, including Yucca, 1970s. A deeper look at Bawden’s engravings and lithographs also shows Bawden’s playful use of perspective, as in Mount Pleasant Road and London Back Garden, both created in 1927.

Other rooms will reflect Bawden’s fascination with places and architecture, with watercolours and linocuts depicting Essex churches and Ethiopian palaces. As an official war artist Bawden spent the years 1940-45 travelling around North Africa, the Middle East and Europe, and alongside paintings of the places he visited he created a remarkable series of portraits. Up to this point Bawden’s depictions of the human figure were rarely bigger than a matchbox, but now he successfully battled his own feelings of inadequacy as an artist to produce some of the most compelling artworks of the conflict such as A Sergeant in the Police Force formed by the Italians, 1940-1944. Portraits of Iraqi Jews, Kurds and Marsh Arabs will be displayed alongside servicemen of different African nations, revealing the range of people Bawden encountered and his warm treatment of all.

The exhibition culminates with an exploration of Bawden’s lifelong love of storytelling. One wall will be covered in original drawings, almost all from private collections, that span every decade from the 1920s to the 1980s. Another will feature studies for some of Bawden’s best-loved murals, while the last works are among his most colourful and inventive, including several linocuts from his much-loved series, Aesop’s Fables. Highlights include designs for Fortnum & Mason and Twinings, alongside fanciful illustrated books created by Bawden for his children.

‘Edward Bawden’ is curated by James Russell, who curated ‘Eric Ravilious’ - Dulwich Picture Gallery’s most visited exhibition, in 2015. He is the author of ‘The Lost Watercolours of Edward Bawden’ (Mainstone Press), a study of Bawden’s 1930s paintings, as well as titles devoted to Eric Ravilious and other artists of the period. Speaking of the show, he said:

“This exhibition celebrates Bawden’s many achievements across all the disciplines he mastered, while also offering visitors an intimate portrait of the artist through studies, drawings and illustrated letters. Bawden’s unrivalled skill as a designer, irrepressible sense of humour and profound feeling for place will flow through the exhibition, offering visitors a varied, entertaining and sometimes moving experience.”

“This will be an ideal summer show here in the idyllic setting of Dulwich Picture Gallery. Following in the footsteps of our spectacular Eric Ravilious exhibition in 2015, visitors can expect to be transported through Bawden’s extraordinary works to a characterful world full of humour and innovation”.

Loans have been secured from a number of private collections, as well as a wide range of institutions including the Imperial War Museum and The Fry Art Gallery, Saffron Walden (North West Essex Collection Trust). With thanks to Trustees of Cecil Higgins Collection and The Higgins Bedford, the home of the Edward Bawden archive, major lenders to this exhibition.

An extensive full-colour catalogue will accompany the exhibition.

With thanks to Trustees of Cecil Higgins Collection and The Higgins Bedford, the home of the Edward Bawden archive, major lenders to this exhibition.

Edward Bawden was born in England on 10 March 1903, at Braintree Essex, the only child of Edward and Eleanor Bawden. His parents were Methodist Christians and his father an ironmonger. He was a solitary child and spent much of his time drawing.

On leaving school in 1918, he attended the Cambridge School of Art (1918-1922) where he became interested in calligraphy and in the work of Aubrey Beardsley, Richard Doyle, and William Morris. He received a scholarship to the Royal College of Art (1922-1926) to complete a diploma in illustration. At the college, he belonged to the circle of friends which included Eric Ravilious, Douglas Bliss and Enid Marx, a group tutored by Paul Nash. While still a student, Edward Bawden and Eric Ravilious were commissioned by Sir Joseph Duveen to paint a mural at Morley College, London.

After graduating, Edward Bawden taught at Goldsmith’s College and the Royal College of Art. He also worked on a large variety of projects for the Curwen Press (where Ravilious and Nash also worked) and subsequently for many other publishers, producing book illustrations and cover designs, posters and advertisements, leaflets and calendars, including commissions for Twinings, Poole Potteries, Westminster Bank and the London Transport Board.

In 1932, Edward Bawden married Charlotte Epton, who had been a fellow-student at the Royal College. They had two children, Joanna and Richard, both of whom became artists. He held his first one-man show, mainly of landscapes showing the influence of Nash, at the Zwemmer Gallery in London in 1933. During World War II, he served as an Official War Artist in the British Army, travelling to Belgium, France and the Middle East. He produced mostly watercolours at this point. Some of his paintings depict the unique life led by the Marsh Arabs in Southern Iraq.

It was during the late 1950s and the 1960s that he produced the linocuts and lithographs for which he is best known - among them Brighton Pier, Liverpool Street Station and the series Nine London Monuments.His later work is notable for its simplicity of line and its wit, and is representative of linocutting at its best. Between 1930 and 1970, Edward Bawden was an important member of the Great Bardfield Artists group of local artists. Having been elected an Associate of the Royal Academy in 1946, he was appointed trustee of the Tate Gallery (1951-1958) and Honorary Fellow of the Royal College of Art (1962).