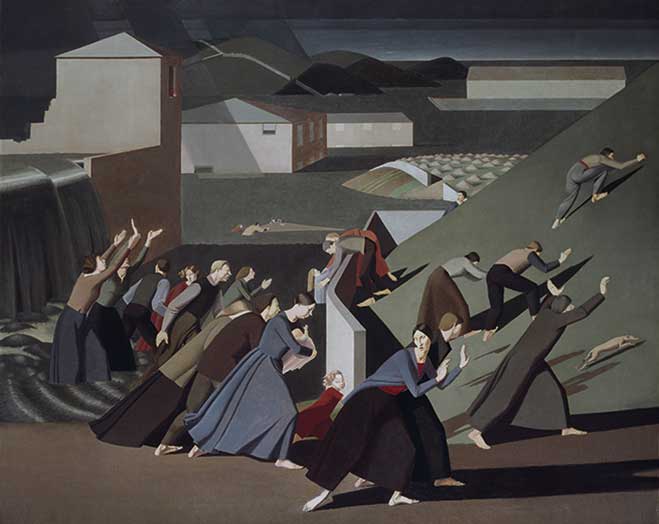 Dulwich Picture Gallery will present the first major retrospective of work by Winifred Knights (1899-1947), an award-winning Slade School artist and the first British woman to win the Prix de Rome. The exhibition will establish Knights as one of the most original women artists of the first half of the 20th century, bringing together her most ambitious works and preparatory studies for the first time since they were created, including the apocalyptic The Deluge, 1920, which attracted critical acclaim as ‘the work of a genius’.

Knights’ admiration for the Italian Quattrocento was the inspiration for a highly distinctive and painstakingly executed body of work. The smooth surface, contemplative mood and harmoniously restricted palette of her paintings consciously recall early Renaissance frescoes, adapted to everyday subjects from her own time. Knights’ works are deeply autobiographical: presenting herself as the central protagonist and selecting models from her inner circle, she consistently re-wrote and re-interpreted female figures of fairy-tale and legend, Biblical narrative and Pagan mythology to create documents of her own lived experience.

Arranged chronologically Winifred Knights (8 June – 18 September) will highlight the key periods in the artist’s career, beginning with the work she produced at the Slade School before charting her stylistic developments at the British School at Rome. The exhibition will also explore significant themes that run throughout Knights’ oeuvre including women’s independence, modernity and her experiences of wartime England. Over 70 preparatory studies will provide a true insight into Knights’ working process, displayed alongside her large-scale paintings to reveal an artist of supreme skill with meticulous attention to detail.

“Although never part of the modernist avant-garde, Knights engaged with modern-life subjects, breathing new life into figurative and narrative painting to produce an art that was inventive and technically outstanding. She explored form and colour to create a mood of calmness and reflection that impacts directly on our senses. Like so many women artists, heralded and appreciated in their own day, she has disappeared into near oblivion. This exhibition, in bringing together a lifetime of work, will create an irrefutable visual argument that she was one of the most talented and striking artists of her generation.”

Knights attended the Slade School from 1915-16 and 1918-20, four years that would prove definitive in terms of her artistic development. Under the rigorous tuition of Henry Tonks and Philip Wilson Steer, she learnt the importance of meticulous compositional discipline which included the use of scale drawings, full-size sketches and life studies, a large selection of which will be exhibited to highlight her early development as an artist and offer a fascinating account of art education at the Slade during this time.

Early works reflect Knights’ growing awareness of women’s rights, due in part to her close relationship with her aunt Millicent Murby who is sensitively portrayed in the pencil drawing Portrait of Millicent Murby, 1917. A prominent campaigner for women’s emancipation and the right for married women to work, Murby’s writings had a profound influence on Knights’ early compositional work. The seminal work, The Potato Harvest, 1918, is the first of Knights’ compositions to portray the harmonious interaction of male and female workers. Leaving the Munitions Works, 1919, records female munitions workers where, albeit momentarily, progress in the economic emancipation of women was evident. A Scene in a Village Street, with Mill-hands Conversing, 1919, shows a female trade unionist arguing for better conditions for women’s labour at Roydon Mill, Essex.

In 1920 Knights became the first woman to win the Prix de Rome scholarship in Decorative Painting awarded by the British School at Rome with one of the most enduring images in the history of the competition, The Deluge, 1920. Chosen on the insistence of John Singer Sargent, Knights’ painting was seen to possess ‘a rare command of technique in hue, figure and composition, and a meticulous care in detail’.

This epic work will be displayed alongside the numerous studies Knights made in preparation including Compositional Study for the Deluge, 1920, which shows the initial ideas for the painting. The final composition brings together 21 figures who clamber towards and up a mountain, soon to be submerged by the flood. Among the present-day men and women in the scene, Knights appears as the central figure. While Knights avoided making any overt reference to the war, this painting is imbued with its presence. The disposition of the fleeing figures is likely to have drawn upon her first-hand experience of the zeppelin raids over Streatham and the sense of panic in the painting may have reflected this traumatic experience. The picture shows the influence of the war paintings of a previous generation of Slade students including Paul Nash, Stanley Spencer and C. R. W. Nevinson.

The impact of the five years Knights spent in Italy was the strongest unifying force in her work, fuelling her imagination in works such as Italian Landscape, 1921 and View to the East from the British School at Rome, 1921. She saw Italy as a living landscape that revitalised her creative spirit and as a result she produced some of the most evocative pictures to come out of the British School at Rome: The Marriage at Cana, 1923, Edge of Abruzzi; boat with three people on a lake, 1924-30, and The Santissima Trinita, 1924-30, all of which bridged Renaissance techniques with modernism to create the highly individual language that was her own. In The Marriage at Cana, Knights appears several times as one of the wedding guests, as does her future husband, Thomas Monnington. The meticulous planning of every scene is recorded in a large number of preparatory studies which will be on display including Study of Gigi il Moro, three- quarter rear view reclining, for The Marriage at Cana, 1922, a renowned model from the village of Anticoli Corrado.

Although she had previously outshone her male contemporaries at the Slade and the British School at Rome, when Knights returned to England in 1926 she struggled with the conventional chauvinism that then dominated the art world. In 1928 she was awarded a prestigious commission to design an altarpiece for the St. Martin’s chapel in Canterbury Cathedral, on which she worked for five years. The finished piece, Scenes from the Life of Saint Martin of Tours, 1928-33, is profoundly autobiographical, expressing Knights' anguish upon giving birth to a stillborn son in January 1928. Among the onlookers are Knights’ mother Mabel and Knights, with Monnington standing alongside. The fixed and melancholic gaze of the three figures records their shared sense of loss.

When World War II broke out, Knights became distraught and her only concern was for the safety of her son. This brought her already intermittent work to a standstill. She only began working again in 1946, a few months before she died of a brain tumour at the age of 48.

The exhibition is guest curated by Sacha Llewellyn, a freelance writer and curator, and Director at Liss Llewellyn Fine Art, specialising in figurative art between the wars.

Loans have been secured from a number of lenders including major lender, UCL Art Museum, University College London, The British Museum, Museum of New Zealand Te Papa Tongarewa, The Wolfsonian-Florida International University, Fitzwilliam Museum, University of Cambridge, Tate, London and numerous private collectors who are generously lending from their collections. A vast majority of these works have never been exhibited before and will be reproduced in the accompanying catalogue for the first time.

Winifred Margaret Knights was born in Streatham, London in 1899. From 1912 – she attended James Allen’s Girls School in Dulwich where she showed artistic talent. From October 1915 she studied at the Slade School of Art where she became a highly successful and favoured student of Henry Tonks. In 1919 she jointly won the Slade Summer Composition Competition with A Scene in a Village Street with Millhands Conversing (UCL Art Museum, University College London). In 1920, she became the first woman in England to win the prestigious Scholarship in Decorative Painting awarded by the British School at Rome. Her prize-winning entry The Deluge (Tate, London) received wide-spread critical acclaim (“the work of a genius”, Daily Graphic, 8/2/21). She remained in Italy until December 1925, marrying fellow Rome Scholar Thomas Monnington in April 1924. Her first major work in Rome, The Marriage at Cana (The Museum of New Zealand Te Papa Tongarewa) was completed in 1923. Studies survive for a number of other compositions (Paradise, Jairus’s Daughter, Bathsheba) but it is unclear whether final versions of these paintings were ever completed. In 1924, Knights started work on Santissima Trinita (Private Collection) which was completed in 1930. In 1928 Knights received a commission to paint an altarpiece for the Milner Memorial Chapel in Canterbury Cathedral which she completed in 1933. She died at the age of 48 in 1947. The Flight into Egypt, a major commission for the Earl of Crawford, on which she had been working for 5 years, remained unconcluded at her death.

Dulwich Picture Gallery is one of the world’s first purpose-built public art gallery, founded in 1811 and designed by Regency architect Sir John Soane. It houses one of the finest collections of Old Masters in the country, especially rich in French, Italian and Spanish Baroque paintings and in British portraits from the Tudor period to the 19th century. The Gallery’s Permanent Collection is complemented by its diverse and critically acclaimed year round temporary exhibitions.

Exodus
In partnership with Dane Hurst and Company
6 – 10 September
Tues – Weds (Previews): £20, £15 students
Thurs – Sat: £35, £30 Friends/Concessions
Dane Hurst and Company return to the Gallery following two sell-out shows last year with Exodus, a new dance based commission inspired by Knight’s work of ‘genius’, The Deluge. Capturing the experiences of the characters depicted in the Deluge and reflecting Knights meticulous working method the piece will trace the movement and narratives of groups captured within The Deluge through individual vignettes to be discovered by the audience throughout the Gallery spaces. The piece will culminate in an apocalyptic climax running down the Gallery’s central enfilade.

LATE: Winifred Knights: Forgotten Fashion Icon
Friday 8 July
7.30 – 10.30pm
£25, £20 Friends, £15 Students (includes a free drink on arrival)
An accomplished painter, the first woman to hold the prestigious Rome Scholarship and a style icon, Winifred Knights is an artist forgotten by time. Join the Gallery for a special Late celebrating Knights’ unique painting and fashion style. Enjoy mini-talks on fashion aesthetic with Jane Shrimpton, live catwalks featuring womenswear designs for the Gallery shop by designer Terry Macey and fresh looks by students from Westminster’s MA in Menswear. Get your own creativity flowing with our art-making activity, visit the exhibition and drink up our 1930’s inspired cocktails to the sounds of 30s classics.

DISCOVERY DAY: The Renaissance of a Slade Scholar
Winifred Knights (1899 – 1947)
Sunday 12 June
10.30am – 3.30pm
£40, £35 Friends, £25 Students
Join us for a unique one-off Discovery Day on that will encompass her life from her years at the Slade School of Fine Art and her evacuation during the First World War through to the time she spent at the British School at Rome in the 1920s and the commissions she worked on in the years leading up to World War II.
Tea and Coffee provided on arrival
Lunch provided 12.30 – 1.30pm

Image: Winifred Knights, The Deluge, 1920, Oil on canvas, Tate: Purchased with assistance from the Friends of the Tate Gallery 1989