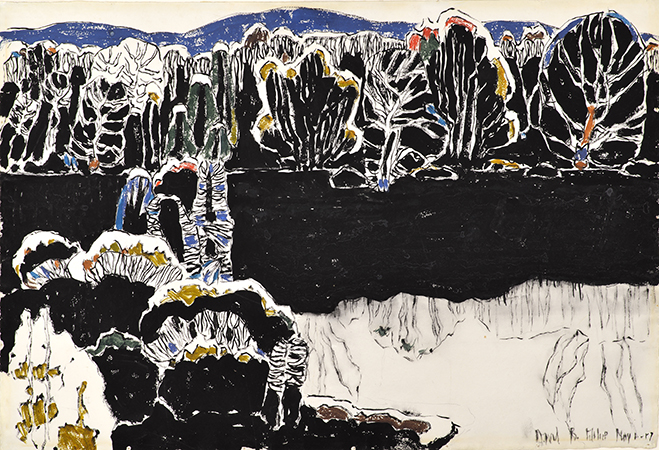 Dulwich Picture Gallery presents a major exhibition of one of Canada’s greatest modern painters, David Milne (1882-1953). It will showcase, for the first time in the UK, a wide selection of his oil paintings alongside watercolours, drawings and photographs, to reveal an artist of true originality and vision. Through periods of intense experimentation, often working in solitude in the wild, Milne developed an extraordinary body of landscapes, fusing influences from Monet, Matisse and Cezanne into a bold modernist language of his own.

David Milne: Modern Painting follows Dulwich’s revelatory Painting Canada show in 2011, which introduced work by Milne’s contemporaries Tom Thomson and the Group of Seven, and From the Forest to the Sea: Emily Carr in British Columbia in 2014.

Arranged chronologically, the exhibition follows Milne’s artistic development as he moves from the bustling sidewalks of New York to the war-torn landscapes of northern France and Belgium and back again to the woods, fields and skies of the northeastern US and Canada. Focus will be given to Milne’s experimentation with colour, line and negative space and his mastery of painting the visual effects of light and reflection.

Born in a small Ontario farming community, Milne was in many ways an artist beyond nationality and visitors will first encounter him in his formative years in New York. He arrived in the city in 1903 to seek commercial work, but the thriving vitality of the city with its many museums and galleries quickly turned his ambitions to fine art. The busy sidewalks and advertising hoardings provided the subject matter through which he could shape influences from Monet and Matisse, balancing representation and abstraction and reducing his subjects to their essentials. Highlights include Fifth Avenue, Easter Sunday(1912) which was included in the landmark Armory show of 1913, where Milne’s paintings were exhibited alongside works by Matisse, Braque, Monet and Van Gogh as well as Billboards (1912) and Columbus Monument (1912), which offer a visual record of the early history of commercial outdoor advertising.

The show follows Milne to Boston Corners, a village in New York State, where, in 1916, he and his wife, Patsy Hegarty, set up an austere life with Milne’s time devoted to his painting. This room showcases a period of major advancement, as we see Milne experimenting with conjuring light reflections in watercolours such as Bishop’s Pond, (1916). This room also includes a series of experimental paintings of Patsy seated in the landscape, where Milne explores the phenomenon of camouflage through patterned composition.

The central rooms in the exhibition showcase some of the most formally daring works of Milne’s career, revealing a shift in his style as he sought to record military training camps in the UK and later, the recently emptied, war-ravaged landscapes and villages in France and Belgium for the Canadian War Records. The harrowing scenes he encountered during his months as an official war artist prompted a new painting style of sparer means with subjects splintered into shattered brushstrokes and areas of startling blankness used to dramatic effect as in Montreal Crater, Vimy Ridge (1919), one of Milne’s most famous war paintings.

The exhibition goes on to explore Milne’s periods of solitude, which deepened his explorations of the natural world and his place within it. Inspired by the writings of Henry David Thoreau, which extol the value of communing with nature and the withdrawal from consumer culture, Milne spent the winter of 1920-1 alone on the side of Alander Mountain, behind Boston Corners, and there engaged in some of his boldest experiments yet. He built himself a hut in the style of the military Nissen huts he had seen in Europe and there created a series of remarkable paintings including White, the Waterfall (1921) one of Milne’s favourites among his own works, where all that is inessential has been bleached away.

The exhibition concludes with a series of elemental still-life studies and sky paintings made during Milne’s time at the remote Six Mile Lake. Again he built himself a cabin to live in alone, and there his creativity was unleashed anew in works that express a profound connection to the natural world. For the first time, he enjoyed sustained contact with like-minded artists, curators and critics in Ottawa and Toronto, with whom he corresponded, and in 1934 he finally began showing his work commercially in Toronto. He was starting to find recognition at last as one of Canada’s most distinctive and sophisticated modern artists. Highlights include a series of horizon pictures which represent his final surge of modernist work including Summer Colours (1936).

David Milne: Modern Painting is curated by Sarah Milroy, a writer and curator based in Toronto, and Ian A C Dejardin, Executive Director of the McMichael Canadian Art Collection in Kleinburg, Ontario and former Sackler Director of Dulwich Picture Gallery. They return following the success of Emily Carr in British Columbia in 2014 and Vanessa Bell in 2017. Loans have been secured from a number of private lenders, as well as a wide range of Canadian institutions, including the National Gallery of Canada, the Art Gallery of Ontario, the McMichael Canadian Art Collection, the Winnipeg Art Gallery and the Vancouver Art Gallery. The exhibition is accompanied by a fully illustrated catalogue from Philip Wilson Publishers and a series of events in the gallery.

“In Canada, the name David Milne evokes complete devotion to the task of making art, and a firm and unshakeable independent spirit willing to risk all in the quest to be the best artist he can be. At the same time, Milne is beloved for his ability to capture landscape in ways that are often uncanny in their inventiveness, each painting an absorbing world of its own. This is a modern artist for the ages, and one of Canada’s best kept secrets.”

“We’re delighted to introduce this adventurous and highly poetic Canadian artist to British audiences, which has only been made possible from sponsorship from the BMO Financial Group. Milne took inspiration not only from the great Post-Impressionists, but also from his forays into the wilderness. His paintings dazzle with light and colour and with an expressive intensity that reminds me of Paul Nash and anticipates the work of Peter Doig – it will be a revelation to many.”

The exhibition is organised by Dulwich Picture Gallery and the McMichael Collection of Canadian Art in collaboration with Vancouver Art Gallery, with the exceptional support of the National Gallery of Canada.