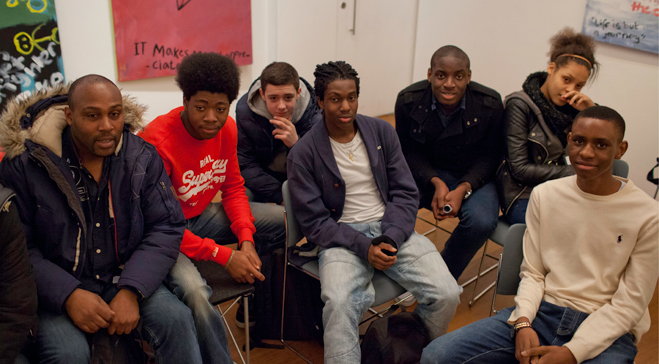 I see Poverty
I see the Parliament squabbling
about insufficient matters.
I want Peace
and Equality.

I see Poverty
it reminds me of Africa and Asia
I see Poverty
Peckham and Camberwell
are they the same sort of poverty?

Young carers from Southwark have been working with spoken word artist Paul Cree to write their own interpretations of Dulwich Picture Gallery’s Old Master paintings. Common emotive themes such as family, politics and poverty were discussed by the group who used paintings by artists such as 17th century Spanish painter, Murillo, as a catalyst for storytelling, beat boxing and rhyme. On Friday 21 February they shared their final work at an informal performance at Dulwich Picture Gallery.

A young carer is someone whose life is in some way restricted because they take responsibility for a member of their family who has a disability; or is ill, experiencing mental distress or is affected by substance misuse. Young carers often assume a level of responsibility which would usually be associated with an adult. Around the home, very young children can be responsible for cooking, cleaning and caring for parents or siblings.

There are 244,000 people under 19 years old caring for relatives in the UK; however, in reality these figures may be higher, as many young carers are not recognised in society or statistics.

‘WordArt’ was set up in partnership with Action for Children’s Southwark Young Carers project, to give young carers aged between 11 and 18 a voice and provide an opportunity for them to explore a new creative media. In a series of workshops held at Southwark Young Carers, Camberwell, the group explored their personal interpretations and contemporary impressions with Cree.

The young carers recited their poems with an invited audience, including guest speaker Conrad Murray, music producer and director of the BAC Beatbox Academy. He concluded the evening with a speech to the young people:

“Young people - you are always hearing from adults, but we don’t always listen to you guys. You’ve got something to say. What you said was very moving. Dulwich Picture Gallery, in Dulwich Village of all places, is listening and for that I think we should give a round of applause.”

The Youth Engagement Programme at Dulwich Picture Gallery focuses on cultivating the positive impact young Londoners have on their environment. The programme aims to inspire young people to develop as artists and art leaders through professional creative arts activities. The Youth Engagement Programme runs all year round and engages people aged 11-25 out of school hours at Dulwich Picture Gallery and in the community. It is free of charge inclusive to all young people but targeted at young people who might not otherwise engage with the Arts.

Southwark Young Carers works with young people who care for a member of their family – whether it's a parent with a long-term illness, someone who's elderly or suffering from mental ill health, or dealing with the effects of drug and alcohol abuse.

Young carers often spend long hours caring for relatives when they should be playing with friends, going to school and simply being young. Action for Children works to give young carers both practical and emotional support, make them feel less alone, and find ways of making their lives easier, and with less responsibility.

Action for Children works directly with more than 300,000 children, young people, parents and carers each year.  With 650 services throughout the UK we are in communities where you live and work. We help transform the lives of thousands of children and young people each year and we’ve been doing so for 145 years. For more information, visit www.actionforchildren.org.uk or follow us on Twitter @aslongasittakes