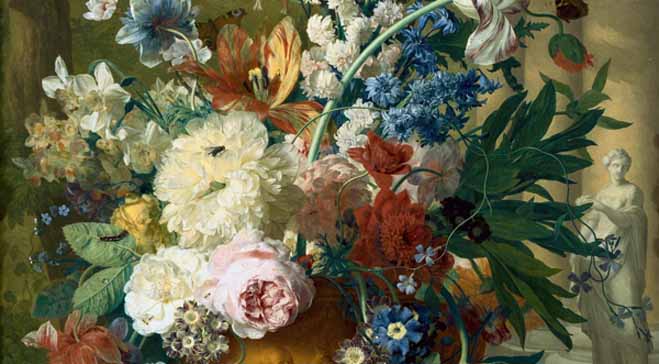 A special collection of works by the 18th-century Dutch artist Jan van Huysum will be on display at Dulwich Picture Gallery from 1 July until 28 September 2014. 'An Impossible Bouquet, Four Masterpieces by Jan van Huysum' will bring together beautiful works from private collections alongside Dulwich’s own painting that together showcase the artist’s ingenuity and astonishing ability to paint flowers, fruit and insects with minute attention to detail.

Included within the display are two paintings that have remained together since they left Van Huysum’s studio around 1732: Flowers in a Vase with Crown Imperial and Fruit and Flowers in front of a Garden Vase. Their complementary compositions suggest he conceived them as pendants (painted as a pair) - a rarity amongst his oeuvre of 241 paintings. His impressive arrangements could depict over 35 different types of flowers, which, before modern cultivation techniques, would never have been seen together at the same time of year. To overcome this Van Huysum worked from sketches and painted some of his arrangements over two years, explaining why he signed his paintings with two dates.

Van Huysum is widely regarded as the greatest still-life painter of his time. His ambitious compositions demonstrate his ability to combine a huge variety of species into beautiful, coherent still lifes that made him popular with collectors both during and beyond his lifetime. The paintings included within this display were once owned by prominent 18th-century collectors, including the Gallery’s founders, Sir Francis Bourgeois and Noël Desenfans, as well as the Swiss painter and dealer Jean-Étienne Liotard.

'An Impossible Bouquet, Four Masterpieces by Jan van Huysum' has been curated by Dulwich’s Curatorial Fellow Henrietta Ward. The Gallery’s forthcoming Dutch and Flemish schools catalogue, to be published by 2016, will feature Vase with Flowers along with detailed entries for masterpieces by Rembrandt, Rubens, Van Dyck and Teniers. The catalogue is part of the Gallery’s strategy for the Curatorial Centre of Excellence, a major long-term commitment towards scholarship, learning and training of future curators.

Image: Jan van Huysum, Flowers in a Vase with Crown Imperial and Apple Blossom at the Top and a Statue of Flora 1731-2, Private Collection

Jan van Huysum (1682-1749) was based in Amsterdam, where he painted flower and fruit still lifes, as well as landscapes. He was taught by his artist-father Justus and worked in his studio until around 1701 when he decided to set up as an independent painter. His depictions of luxuriant flowers in classical vases were soon admired by collectors, particularly the way flowers, fruit and insects were rendered with astonishing accuracy and detail. He achieved this precision with fine brushes - some might have only had a single hair – which were ideal for depicting the vein structure of a leaf, the delicate hairs on a raspberry or the translucency of a water droplet. His skills earned him great acclaim and in 1750 the Dutch writer Jan van Gool (1685-1763) wrote Van Huysum’s first biography which reaffirmed the painter’s unwavering popularity amongst the wealthiest European collectors of the day; his floral paintings could be found in the aristocratic estates of the Duke of Orleans in France, Sir Robert Walpole in England, Prince William of Hesse-Kassel and the King of Poland.

Around 1720, Van Huysum turned from painting on a dark to a light background, believing the flowers and fruit wouldbe seen to better effect. He then placed his vases in architectural gardens which hinted at a grand, classical landscape beyond. The splendour of his new approach substantially increased the demand for his work, so much so that they sold for unprecedented prices, a luxury he experienced during his lifetime. Fully aware of the value of his unique skills, Van Huysum disliked anyone entering his studio, and supposedly taught only one student, for fear they might learn the secrets of his meticulous – and highly lucrative - painting techniques.
Dulwich Picture Gallery
Dulwich Picture Gallery is England’s first purpose-built public art gallery, founded in 1811 and designed by Regency architect Sir John Soane. It houses one of the finest collections of Old Masters in the country, especially rich in French, Italian and Spanish Baroque paintings and in British portraits from the Tudor period to the 19th century. The Gallery’s permanent collection is complemented by its diverse and critically acclaimed year round temporary exhibitions.